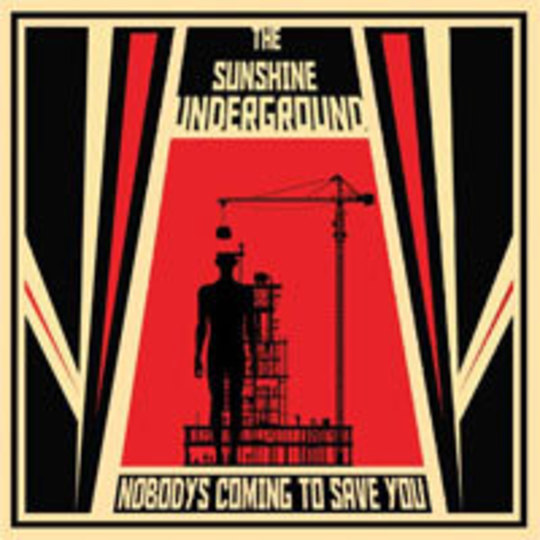 The music business can be a harsh place at the best of times. Just ask The Sunshine Underground. Four years ago they were one of this country's hottest musical tips, having been paraded alongside Klaxons as figureheads for the so-called 'New Rave' movement. One lukewarm received debut album followed by almost three years of inactivity and the Leeds based foursome are in danger of becoming the nearly and forgotten men of a scene that expired almost as quickly as it began.

It's probably a good job, then, that The Sunshine Underground never really fitted into that pigeonhole. Sure, they may have utilised the odd cowbell or two and owned a Rapture album between them, but there was always a nagging suspicion that their roots lay more along the lines of traditional rock, with the ultimate ambition seemingly fixated on stadium-sized ventures a la Oasis or U2. Of course we can all dream, and to their credit, The Sunshine Underground display a maturity here on at least half of the ten songs that make up Nobody's Coming To Save You that suggests the day-glo accessories have been dispatched to the back of the wardrobe, for the time being at least.

Whereas predecessor Raise The Alarm hinted at a band more than capable of their aims should they discover an identity of their own making, Nobody's Coming To Save You feels like a half-realisation of a record that borders on the euphoric but still ends up lost in its own state of musical schizophrenia, particularly as it reaches its disappointing (anti)climax.

Frontman Craig Wellington owns a set of pipes both impressively opulent and distinctive, which characterises Nobody's Coming To Save You throughout, particularly its stronger moments. Indeed had just the first five songs here been released as an EP, The Sunshine Underground could be looking at a much higher marking than the average '6' this record's scorecard finds itself emblazoned with. Opener 'Coming To Save You', with its optimistic us-against-them warcry is a barnstorming way to kick off any album, and Wellington's potent voice coupled with an energetic fervour created by Stuart Jones' guitar implies the four-year wait between albums could be worth the while. Likewise the thudding percussion of 'Spell It Out' and funk-driven anthem qualities of 'We've Always Been Your Friends'; at this stage the record is actually looking like being one of 2010's most surprisingly inspired comebacks. However, even on the bombastic Clash-like bravado of 'A Warning Sign', possibly Nobody's Coming To Save You's standout moment, there's a nagging doubt that the band's confidence in their own abilities don't quite match up to their ambitions, Wellington pleading "I can't wait any more, don't run me out of time" over the song's mournful coda.

Sadly from hereon in, the nagging doubts merge into maudlin irrelevance. The clumsy 'Change Your Mind' sounds like LCD Soundsystem if James Murphy had found solace in the wares of baggy also-rans Airhead and The Milltown Brothers, while 'Any Minute Now' is just an exercise in middle-of-the-road bluster without any real substance. 'Here It Comes', meanwhile, is the kind of tune we'd expect to hear soundtracking The Football League Show on a Saturday evening, and that analogy sums up both band and record; despite the grandiose expectations there's little here to lift The Sunshine Underground out of the lower leagues. Even though Nobody's Coming To Save You tries its damnedest to succeed in delivering a change for the better, its creators need to make up their collective minds once and for all as to what direction they wish to take. The second half of this record's prolonged bouts of indecision can only lead to one, solitary destination: nowhere.