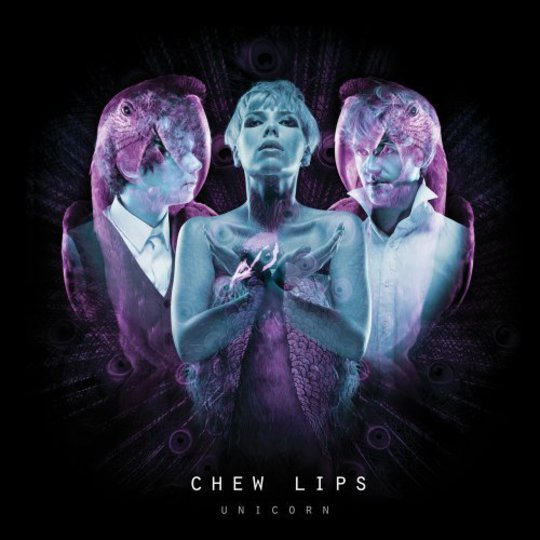 Unlike Kitsune label mate La Roux, you won’t be embarrassed to have Chew Lips in your record collection by September. Simply by being, y’know, interesting, they have attained perhaps the highest accolade this brand of electro-pop has to offer, in that no songs on this album will ever become ringtones and it would all sound faintly ridiculous emanating from anything with a spoiler; too subtle for subwoofers, thank god.

That’s not to say Unicorn won’t take up residency in your head; it’s just that it will be a welcome guest. And that’s primarily because of the biggest gun in the Chew Lips armoury, their own weapon of mass devotion: the lungs of leading lady, Tigs. We can say she can sing.

Over the dreamy opening bars of album and the track, ‘Eight’, her vocal comes on like the sullen lovechild of EBTG and Alanis Morrisette. A bit weird therefore, but then that’s the point of this eerie opener. The beats kick in around halfway through, allowing you to exhale and perform a comedy swipe of the imaginary sweat on your forehead. For it is over these beats that Tigs really shines, where she can begin to belt it out a bit. The sullen little girl suddenly becomes Sexy; it’s oh so sultry and comes from the same school as Miss Mossheart and Karen O.

But what about those boys - James Watkins and Will Sanderson - and their beats? Play Unicorn at half volume and it just sounds weird; turn it up to til your ears bleed and it all makes sense. Some producers seem to forget that dance music needs to at least hold your attention; a bare minimum even if it’s mainly for dancing to. If - like 'Play Together' - it can grab you by the cojenes and drag you bodily on to the floor then all the better. There’s so much going on in this track – a seriously big bass line, whirling synth washes and dirty electronic sprinklings – it’s hard to say what exactly has that hold over you, but everything has its place and, either way, it’s anything but ignorable.

There are, however, times when you’ll begin to wonder, hmm, what’s the point of all this exactly? “A high speed chase on a wedding day, give and take it’s all the same”? Whose wedding day? What does this nihilistic nonsense even mean? ‘Karen’ – an ode to the short and tragic life of Karen Carpenter it turns out - could be about any old chick of the same name – indeed, it’s so vague that it could apply to anyone or any situation. You get the impression that the actual words are mere foils to the mouth from which they’ve sprung forth and the beats which carry them along so well. But, if you can countenance a lack of lyrical cohesion, then perhaps it doesn’t actually matter; it has a sense of abandon and maybe that’s enough. Who needs deep from hands-in-the-air-grinning-like-an-idiot-music, anyway?

This aside, Chew Lips clearly have respect for their audience; a respect which lends Unicorn more longevity than - on paper, anyway - it should have. The whole record comes in at almost exactly 30 minutes - a nice round number that allows for ten songs of in and around three minutes each - which keeps it punchy and makes the whole thing move: no time to get bored, here comes the next song, anyway. It also shows a certain humility - no need to over-cook it, now is there? There’s no lack of confidence though; leaving previous singles ‘Salt Air’ and ‘Solo’ off their debut, despite their success, shows a dedication to the creative process and an originality which sets them apart from yer average synth-pop pretenders. In short, it certainly has swagger but not so much you’ll want to punch it in the face: Chew Lips have planted a carefully selected crop and, for that, they deserve to reap the rewards…