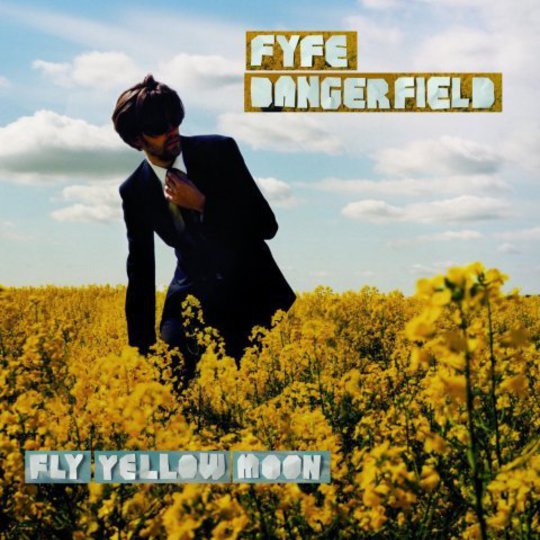 Mainly written whilst the Guillemots toured their second album Red, Fly Yellow Moon was intended to be an album of stripped down recordings, mainly acoustic guitar or piano. However, Fyfe Dangerfield frequently just couldn't help himself, leaving us with a mixed bag of an album; it veers between the sort of hushed acoustics keeping with Dangerfield's original vision and the sort of unabashed pop hysterics for which he is renowned. Unfortunately there is a likewise disparity in quality.

Fly Yellow Moon is by far at its best on the songs with the most fleshed out arrangements, which invariably means they are the songs which sound the most like Guillemots. Opening track 'When You Walk In the Room' starts of with a stuttering drum machine beat, fidgety vocal tics (an adjective which is generally applicable to Dangerfield himself), clipped distortion and space echo effects more suggestive of Red's attempts at 'chart-humping R'n'B'. But this swiftly gives way to an engine of drum'n'piano chords, over which Dangerfield barks out his contentment with (his love)life: "In this moment, no-one is pulling me down into the ground". He slips into giddy falsetto for the chorus of "I want you endlessly with the song ending in a racket of glorious farcical vocal tics. So far, so good... so Guillemots.

Lead single 'She Needs Me' is even better. Its verses are again anchored by a steady beat and piano, with some showtune-style ivory tinkling a signpost to the song's glitzy chorus; strings swell slowly throughout the first verse before bursting into a chorus of widescreen Sixties indebted pop. The second verse stomps around dressed in impossibly fuzzy brass, but this is a song that's all about chorus. Producer Bernard Butler must be wishing he had a song as good as this to give Duffy, because with its parping brass section and rapturous string refrain, 'She Needs Me' could easily sit comfortably next to 'I Only Want To Be With You' on The Very Best of Dusty Springfield. However, it's infinitely more satisfying to think of Dangerfield ecstatically throwing his gangly frame around to its strains.

Of the more fleshed out arrangements only the surging and crashing walls (and squalls) of guitar on the 'Faster Than the Setting Sun' sound notably different to the work of Dangerfield's full-time concern, being a pretty successful, if rudimentary, excursion into sun-kissed psychedelic rock. Coupled with abstractly romantic lyrics like "They don't slow-dance around me no more", the effect is strikingly beatific.

On these denser productions Dangerfield's lyric are either easily ignored or in their vagueness compliments a mood predominately conveyed in music rather than words. Unfortunately, on the more stripped down tracks the lyrical clunkers are to the fore. 'Livewire' is crammed with cringe-inducing couplets delivered in a earnest tone regrettably redolent of the acoustic emo-pop of Get Cape.Wear Cape.Fly. Take, for example, "Good Samaritans never play their part/ Come round , let me put my hands around your heart" or "Livewire, your life is in the fire/ We've got everything to play for, 1-1 halftime." Just excruciating. Lyrics have never been the Guillemots' calling card, but listening back to Through the Windowpane it's simultaneously heartening and disappointing to know that Dangerfield can do much better. Musically the song is equally earnest and straight forward with its plaintive, yet unaffecting, fingerpicked acoustics. Penultimate track 'Don't Be Shy' treads a similar path of cringe-worthy acoustic balladry, eg: "when you're young buckets don't have holes in, days are long, summer always rolls in..

This isn't to say that Fly Yellow Moon's quieter moments are all disasters. 'Firebird' is a gorgeous lullaby, all hushed tones of guitar and piano with slightly ominous strings lurking like shadows, the perfect compliment to Dangerfield's magical allusions to "conquering light". 'So Brand New' sees Dangerfield paint himself as a Leonard Cohen-type crooner, although his much more expansive vocal range allows him to lend the chorus a gentle swoop, while the generous use of reverb gives the song the grandeur of sixties chamber-pop without sacrificing intimacy. Conversely the piano balladry of 'Barricades' only trips up when it forsakes the beautiful melody of the verse (the kind that the Embraces and Athletes of this world would bank upon to resurrect their careers ) in favour of repetition of the rather forced emotion of the chorus.

So, Fly Yellow Moon flirts with, but ultimately averts, disaster by virtue of the strengths we already know Fyfe Dangerfield to possess as Guillemots' principle songwriter: a knack for making bright pop songs on a life-affirming scale, delivered with an infectious and indefatigable enthusiasm. So what exactly is the point of this solo outing? Fly Yellow Moon's closing track repeats the phrase "This could go in any direction." Such is the familiarity of the album's highlights this doesn't quite seem like an appropriate catchphrase, yet Fly Yellow Moon does still provide just enough surprises, along with the affirmation of its creator's ostensible talents to warrant its existence.