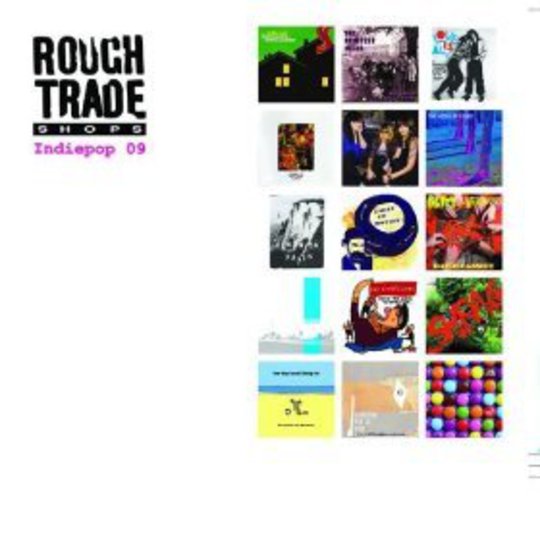 As London's most influential record store for the past three decades, Rough Trade has been responsible for providing many a fledgling artist a stepping stone from the underground to a far wider audience. Having celebrated its 25th anniversary in 2001 by issuing the Rough Trade Shops: 25 Years Of... 4-CD box set, its legacy has been well-documented ever since by each subsequent compilation put out, whether that be 2002's Rough Trade Shops: Electronic 01 or the following year's Rough Trade Shops: Country 1 collections.

Rough Trade Shops: Indiepop '09 is the follow-up to 2004's whopping 46-track compendium that collated all of the initial first wave of C86-related acts. Whereas its predecessor focused on historical (and occasionally long-forgotten) artefacts of a bygone era, this 25-song disc celebrates the present while casting one eye knowingly into the future. While the influence of people like The Jesus & Mary Chain, My Bloody Valentine, The Primitives, Primal Scream and The Pastels live on, there's a whole new breed of bands taking the blueprint and carving out identities all of their own.

Mixing established bands such as DiS favourites Los Campesinos! - whose 'You! Me! Dancing!' still sounds as delectable today as the first time we heard their demo nearly three years ago - and The Pains Of Being Pure At Heart, alongside newer acts like London's Veronica Falls (think Thee Headcoatees on a blind date with the surviving members of The Birthday Party) and Sarah Records obsessives Moscow Olympics (who despite their moniker actually hail from the Phillippines) ...Indiepop '09 is a must-have collection that never fails to excite or amaze from start to finish.

New York's Vivian Girls contribute an exclusive track, the short, sharp shock of 'Moped Girls' which echoes the gritty bratpunk of hardened souls like The Runaways or Bratmobile while fellow Brooklynites Cause Co-Motion throw in the frenetic 'You Lose' for good measure. Add scene veterans Tullycraft's OCD with guitars that is 'The Punks Are Writing Love Songs', London garage rockers Betty And The Werewolves' ode to the Partridge Family ('David Cassidy') and not one, but two fuzz and reverb inspired Swedish one-man bands (Celestial and The Legends) and you've one of the most comprehensive mix CDs conjured up this year.

Let's hope another five years don't pass before Rough Trade get round to releasing the third instalment of this delightfully essential series.