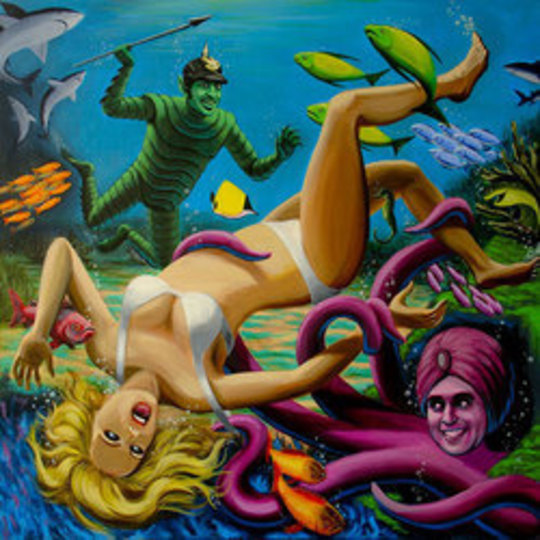 The King Khan & BBQ Show's third outing Invisible Girl is a perfect example of why an album should be lived with for a good deal of time before reviewing. After my first runthrough of the record I was ready to slate it. To dismiss it out of hand as a derivative, throwaway waste of time. Its unoriginality seemed glaring. Offensive even. I had it all planned out. I had my argument ready. This record was going down. Then I thought I should give it another spin. Just to cement my vitriol (now there's a comforting thought for another time...).

And another spin. And another... It hasn't really left my headphones.

The thing is I think I was disappointed. You come to a King Khan related project expecting pumped up soul and gospel tinged jams. Flailing and wailing. Bombastic horns and audible sweat. That's not to say that Invisible Girl doesn't have most of those things, it's just a different side of the Soul 'N Roll coin from the Shrines or The Almighty Defenders.

And besides, expecting a side project band to be the same as the member's day jobs will ultimately leave you feeling betrayed. Though really, which band IS Khan's day job nowadays? Seems his whole life has just become about kicking out the jams in whatever way and with whoever possible. This can only be a good thing for the rest of us.

So, let's take Invisible Girl at face value. That is as a damn good back to basics rock'n'roll party album. Stripped down to just rump shakin' guitar and primal drums, the duo make far more noise than should be possible from the sum of their parts.

Yes, this thing is ridiculously derivative. It won't change lives or rearrange the musical landscape of nations but Kahn was never going to win any awards for originality. It may just raise some roofs and shake some foundations though. These guys have impressive record collections and they want you to know about it. Three decades of rock n roll and pop are plundered by the duo. From straight up Fifties doo-wop to gritty Sixties laced Sonics scuzzed up guitar workouts and even proto-hardcore Stooges rage in 'Truth Or Dare'. Stopping by The Mamas and The Papas and sweet, sweet Beach Boys harmonies along the way.

No theme is left uncovered either. From winsome summer-lovin' at the beach ('I'll Be Loving You') to evil women ('Crystal Ball' – featuring a smile inducing spoken word section) to... uh... tales of teenage courtship gone murderously wrong ('Spin The Bottle'). The track that turned the whole thing around for me, though, was epic centrepiece 'Third Ave'.

This slow burning 'In The Still Of The Night'-esque soul ballad really gives BBQ and Kahn some room to stretch their chops. Freed of the two minute time constraint a glimpse is given into just how showstopping the twosome can be as Kahn pours his heart out to a backing of wonky organ and jangling guitar. It could just be the best doo-wop garage soul track ever written. Or I could just be getting wrapped up in the unexpected melodrama of it all. 'Third Ave' really does save the record from being the tossed out throwaway that it could so easily have become and makes Invisible Girl seem more like a lost garage rock classic than two old friends jamming on classic tropes for shits.

Seriously, the production on this thing is so close to the one mic in a room, needles in the red ethos of the Fifties that it's spooky. Especially the vocals, which have that authentic quality that makes it seem like either your speakers or the singer's vocal chords are torn and ragged. It's so faithful in fact that it manages to transcend what could have been gimmicky in the hands of a lesser band.

Thank god they managed to avoid the dreadful cliché of fake radio crackle in the background. Criticism has been levelled elsewhere at this album for its lyrical simplicity and it's true that Kahn does fall back on some pretty basic themes and rhyming schemes, but really – who comes to this man for earth shattering social insight or emotional depth? In my book a well placed “oomow mow” or “shoo wop” can make up for any lack of heartfelt pathos.

So then, Invisible Girl is a strangely satisfying grower with it's heart in the right place. Namely your booty.