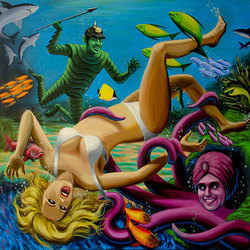 Invisible Girl is a strangely satisfying grower with it's heart in the right place.»

the king khan and bbq shows long-awaited third full-length album will not disappoint the bands admirers or their devoted cult following. 'invisible girl' marks a return to the trademark doo-wop-laced, anthemic garage rock that earned the band their fame and their infamy. the record exhibits their effortless fluency in rock n rolls tenets and traditions, but as mark sultan (otherwise known as bbq) notes, it also includes a song so vile that itcan not even be mentioned. after releases in the interim on revered labels such as crypt, norton,and fat possum, king khan and bbq have returned to la's in the red records for 'invisible girl'.
description from www.roughtrade.com