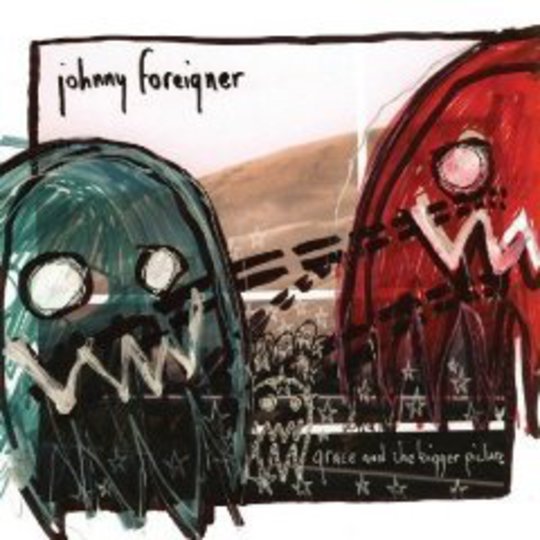 Reviewing a Johnny Foreigner release for this hallowed website is something of a daunting task. For a start there is that 10/10 review for Arcs Across The City. Then there are the countless tour diaries (free gin and broken tour vans never sounded so much fun) as well as glowing reviews across both the main site and the forum (a community which the band themselves are active members). All these facts combined make saying the following slightly unnerving but here goes - Grace and the Bigger Picture is disappointing.

Don’t worry; the Birmingham trio's second album proper is no disaster. Far from it. It’s just that 2008’s debut Waited Up 'Til It Was Light was such a perfect mix of snotty punk attitude, college rock choruses and jagged edge riffs that all who came in contact with it fell under its spell, poring over its every detail (like knowing the amount of drum beats in ‘Salt and Peppa Spinderella’) and spinning uncontrollably during ‘The End And Everything After’. The record is practically perfect and an amazing piece to the Awesome Pals! jigsaw, which is what makes this follow up a harder pill to swallow. Not much has changed in sound or style, and the same details are dealt with the lashing courtesy of Alexei’s caustic tongue, yet things feel missing and short. One of the worries about Johnny Foreigner and this new record is that they don’t appear to be able to see past their own noses. Touring their instruments and transport into the ground is the lifeblood of the band but has left them with a lack of context and variation in song themes and you soon realise that pretty much every song on Grace and the Bigger Picture is about playing gigs, going to festivals, local promoters or tales of being on the road. It might make for memorable listening inside the band circle but outside of it things sound worryingly like the indie equivalent of a mega pop star detailing the fame and fortune of their life in intricate detail.

The second problem here is the sound. Having enlisted Alex Newport (At The Drive-In, Death Cab) to produce it, it's somewhat surprising that the end result of ‘Grace…’ is a stop start roller coaster of quality in which beats often fall flat and guitars sound limp. Take ‘Ghost The Festivals’ for example which barely sounds out of demo stage, whilst ‘Dark Harbourzz’ (song titles need some work too) is perhaps one distorted punk thrash too many. At 15 tracks the album more than outstays its welcome. In fact by the time finale ‘The Coast Was Always Clear’ rolls around the skip button is pretty well thumbed. JoFo have never been a band that click immediately with the listener. Their hooks lie around corners and choruses lie dormant in your brain for months before they are illuminated and make sense, but despite repeated hammerings, too much of Grace and the Bigger Picture seems unable to even get its foot in the door, to the point that a good third of the record merely grates.

That said there is much to be taken from the album. There are four or five songs on here that many bands would kill to have in their arsenal, including the brilliant ‘Criminals’. Like Future Of The Left's ‘That Damned Fly’, ‘Criminals’ takes great pleasure in taking people in the industry to account for their crimes amidst a hurricane of flailing guitars and future crowd surfing memories. Elsewhere the interplay between Alexei and bassist Kelly remains one of the band's strongest points, highlighted best on ‘Custom Scenes and the Parties That Built Them’ and frantic album opener ‘Choose Yr Side and Shut Up!’. Despite having earlier said most Johnny Foreigner songs take a while to reveal themselves, you can’t say that about ‘Feels Like Summer’, a sub-120 second party anthem seemingly designed to incite the spilling of beer and mass hugs. A clear album highlight, you’d be well advised to look up the fantastic remix courtesy of Internet Forever.

Grace and the Bigger Picture is a good, solid album but as follow up to an amazing debut, and in the same year as magical work from contemporaries Sky Larkin, Dananananaykroyd and Copy Haho, you can’t help but come away from it feeling slightly let down. With focus, time and a keen editing eye there is no doubt that JoFo will scale great heights again, but first the band are going to have to look at their own bigger picture.