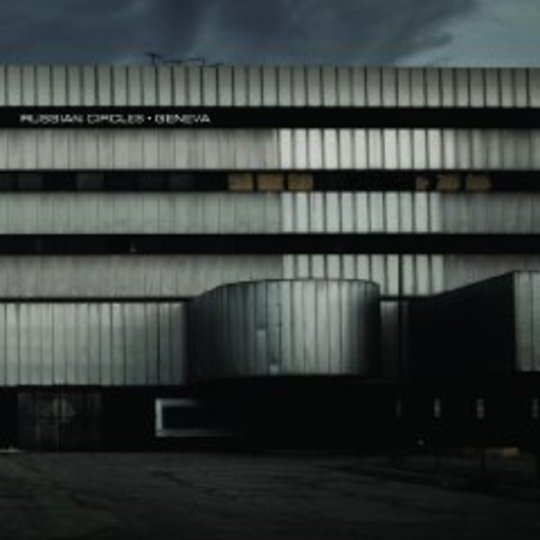 The fuzzed-up finger-tapped intro to ‘Malko’ fills you with anticipation. Something colossal is approaching. But in the essence of anticipation lies predictability, so when the track fails to burst at the seams, it’s a satisfying indication that Russian Circles are confident enough to avoid stuffing their songs with redundant riffs. On Geneva, they keep mouths watering, without listeners feeling sickeningly overfaced.

In dodging exaggeration, ‘Malko’ is indicative of Geneva’s strengths – but it must be said that in itself, the track is a little muddled when compared to the rest of the album. Each pattern fights for musical relevance, making for awkward clashes that disengage from the album’s pace. It loses its impact in a collection of tracks that are distinguished by their intricate self-control.

Opening track ‘Fathom’ gets the balance right. Bleak chords are stabbed out with an axe-like decisiveness, as the rhythm plods boldly onwards. It never draws blood, but keeps the blade firmly held up to the jugular, all the time allowing the expectation to build. Four minutes in, the expectation is too much, and the obvious progression could only be anti-climatic. So Russian Circles stand their ground, and in doing so, hold back just enough to deprive themselves of indulgence while justifying any decision to carry on listening.

Not that they are afraid to land a fatal blow – the violent, anarchic title track follows just in time. Gone are the plods, replaced with gallops, giving the band the rhythmic freedom to show much less restraint. ‘Melee’, however, is a much more natural, organic growth of ideas; a microcosm of the album itself. Each section swells until its successor spills forth from within it. Slow distortions are made beautiful as layers of synth and strings build up, before the chords become so dark that they are almost apocalyptic. Somehow, this progression is so delicately concealed, there seems nothing odd about the juxtaposition of such contradictory themes.

And this is true of Geneva as a whole. Each track takes you on a journey, which on the surface might seem repetitive. But with the passing of every bar, the patterns do change (albeit so slightly it’s barely noticeable), and before long you’ve inexplicably arrived at a new destination, even though at the time of travelling it might have felt as though you were barely moving at all. The result is that you want to keep repeating each excursion, to pick up on what you missed last time, to work out how the hell you actually got from one place to another, or just for the thrill of the voyage itself.

And so you find yourself at the album’s conclusion. ‘When The Mountain Comes To Muhammed’ is a little complacent, relying far too much on the bass and drums for its drive, and with horns that reek of timely tokenism. Closing track ‘Philos’ on the other hand, smoothes out these inadequacies. Over ten minutes it develops into a carefully considered bundle of emotion, as bitter guitars take on sombre horns. Here, the brass sounds almost vocal, giving Russian Circles a sliver of humanity that the guitars are too dispassionate to articulate.

Like many of the tracks contained therein, Geneva ends up far from where it began. But this is not a record defined by where it starts and where it finishes – it’s what there is to take in on the way that counts.