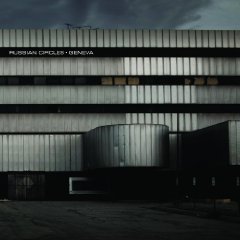 Like many of the tracks contained therein, Geneva ends up far from where it began. But this is not a record defined by where it starts and where it finishes – it’s what there is to take in on the way that counts. »

follow-up to 2008's 'station', produced by brandon curtis (the secret machines) and engineered by greg norman (electrical audio). unite three musicians playing three unique roles, each compelled to move in the direction of what is timeless, to draw on history and take from where they've grown and from the traditions of music made decades ago - and you'll craft a moment, a rite of spring, a new foundation akin to what russian circles have accomplished on their third album, 'geneva'. 'geneva' is built on brevity, the kind of concise summation afforded only those curious enough to develop and explore all relevant options. yet, it easily feels the most 'alive' of all the recordings russian circles have done to date. listen at the opening of 'melee', as the snare drum first strikes and the rhythm slowly begins to take over. it's exactly the kind of memorable, restrained performance that will mark bandmember dave not only as a stupendously lithe drummer but also as a conductor - the dynamic control he exerts throughout is as integral to the album as the diversity in timbre.
description from www.roughtrade.com