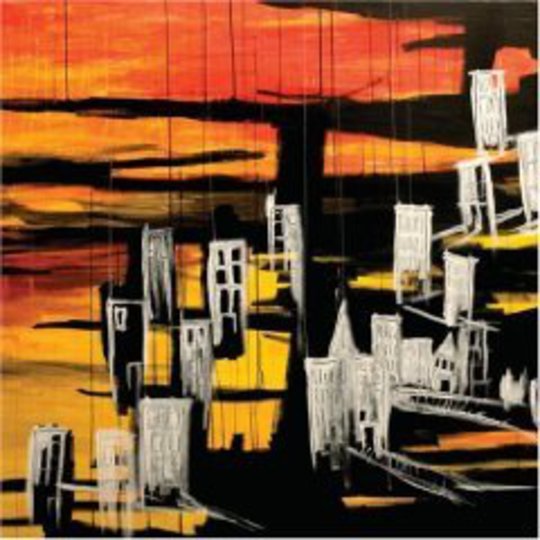 The competition for spaces in the post-rock canon is fierce. Do Make Say Think, unlike so many of their contemporaries, have steadfastly refused to hone their sound to a tight microcosm of its original form. The supernova in Constellation’s stellar network, their earliest experiments with tape manipulation and stargazing guitar wash suffered a critical stability collapse at around the time of 2000’s Goodbye Enemy Airship The Landlord Is Dead, and burst outward in an ever-accelerating blur of colour and chaos. Nearly a decade later the result is arguably the finest back catalogue of any currently operating instrumental rock band.

In a manner appropriate to a star gone nova, their music has continued to gain momentum throughout the years of their existence, James Payment and David Mitchell’s propulsive drum shuffles lending even their most contemplative moments a restless sense of barely contained energy. There is a moment during ‘Say’, the third of the four self-referential pieces that make up the length of the band’s sixth album Other Truths, when the defensive wall of brass and country-fried slide guitar they erect suddenly disintegrates into nothingness, leaving a delicately picked guitar figure suspended weightless in space over frantic, spiraling percussive patterns.

This creation of a sense of parabolic freefall over which melodic motifs can dart free of gravity’s limitations is a trick Do Make Say Think have made entirely their own. It’s also a trick that seems to have bled into their other projects – the jury’s out as to whether Broken Social Scene would still channel that same breathless excitement were Ohad Benchetrit and Charles Spearin not moonlighting members. It’s this element in particular, the giddy release of endorphins when opener ‘Do’ suddenly rushes skyward and when stabs of brass rise from the skeletal structure of ‘Make’ that sets them apart from their peers. At crescendo point many post-rock bands lament for the weight of the world - Do Make Say Think are positively celebratory by comparison. It’s certainly a far cry from the genre’s perceived po-faced attitude.

Where their oeuvre really excels is its sheer breadth – no two Do Make Say Think records sound the same. There is an underlying common thread, but each individual permutation has proved to be as different from the last as the last was to its predecessor. While 2007’s wonderful You, You’re A History In Rust was a set of eight strongly folk-influenced forms, simply conceived and with a strong thematic bond, the four longform jams that make up Other Truths are given time and space to meander. In this aspect it is probably closest to the triptych structure of their career highpoint Winter Hymn Country Hymn Secret Hymn, yet the open, relaxed format of the album’s four pieces pays dividends.

Whilst the periods of downtime between peaks have always been the band’s forte, a product of their assimilation of jazz and folk influences, given greater opportunity to flourish they bind everything together more successfully than ever before. Akron/Family return to provide distant chants buried deep in the mix as though singing across the hypnagogic bridge between waking life and dream, and the swells of brass during the final minute of ‘Make’ negate the song’s perpetual motion, slowing everything down to a delicate stop for an all-too-short contemplative moment.

All of this would be very much by the by if the entire thing didn’t sound so damned alive. It does; Other Truths bristles with energy, exuding an inescapable vibrancy from every pore. It’s not often you find music that lives and breathes with such conviction that you find itself swept away in the charm of it all. That Do Make Say Think have achieved this lofty standard yet again shouldn’t come as a shock, yet it’s testament to their enduring talent that, at every turn, Other Truths continues to surprise and enthrall in equal measure.