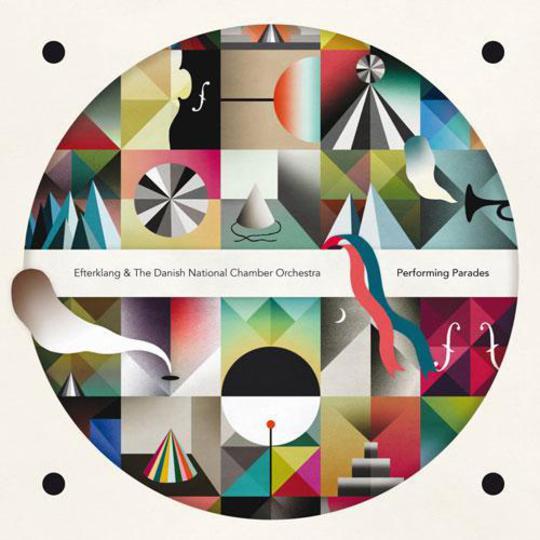 Efterklang inhabit another world, a world which, if the earth contained no human life, Parades would be fit to soundtrack. Their sound is not post-apocalyptic; it’s more symbolic of what came before than what will come after. It's the sound of Mother Nature winding gradually along, where all is well in a land before civilisation, a time of passing serenity versus the bold and beautiful creation of life. All of the above was abundant in their magnum opus that is 2007’s Parades, a record which gained full marks on these very pages.

Performing Parades is not only the logical extension and conclusion of the original; it’s a step up from it. Yes. That original may not especially need bringing to life, already bristling and bustling with an array of organic creeping and crawling, but it has been brought to life, well and truly, with a more than fair-sized helping hand from The Danish National Chamber Orchestra.

There is a certain density that accompanies Efterklang. They are not a band who are more than a mouthful, or an acquired taste, but if you aren’t truly dialled-in to the extravagant orchestration and subtle changes in tone and texture, then proceedings can seem even impenetrable. This is nothing more than a minor flaw, and as was written by a far wiser man of an issue far more lofty than Danish symphonic musical experimentation: “the harder the struggle the more glorious the triumph” – and those are words which resonate for Efterklang. The pay-off comes from repeat listens when, importantly, context and understanding is gained – among the peripheral percussion, glitches, group chanting, and belting brass, each part, large or small, fits and blends to form what is a magnificent tapestry.

Those parts, though, are separate in name if not in concept and execution. The high point is steady, from the initial, twitching, tense, discordant strings of ‘Polygene’ through the heart of the album and out the other end. It is bottomless in its brilliance. So enchanting are vast swathes of this record – the spectral slowing 87 seconds of ‘Mimeo’ followed by the progression from carefree to burdened with a sack of sadness that is ‘Frida Found A Friend’ – it’s easy to forget the variety of the 11 tracks. ‘Caravan’ is the one which acts most like a traditional rock track, with its chiming guitar and dirty bassline but even this proves to be an imposter to convention and tradition, being outlasted by more choral exchanges and Nordic mastery of mystery.

The band’s approach to Parades and the process of Performing Parades cannot and should not be understated. Naturally, the DVD footage of the performance is a pretty neat addition, and one which certainly ties together the whole release and is arguably as much its reason for being as the audio. This is best appreciated and understood when seeing the Danish National Chamber Orchestra in fairy-tale garb. That said, so easy is it to get lost in the variation and stories in sound that the music alone will, ironically, always have just a little extra. The live show is not exactly bulging with rock‘n’roll hyperactivity, and the orchestral additions obviously move us further towards the grand, as is intention. Hearing the rapturous reception from the on looking Danes, you’re reminded that the film footage is only going to be an infinitesimal percentage of genuinely feeling the nuances and intricacies through the stomach, the neck hairs, and the spine, rather than just the ears.

It doesn’t really need to be said again, and although a 10/10 review for Parades the first time round may have seemed a little hyperbolic, it wasn't. It’s a record which is an unending masterpiece and, if at all possible, Performing Parades adds to it - not standalone, but complementing.