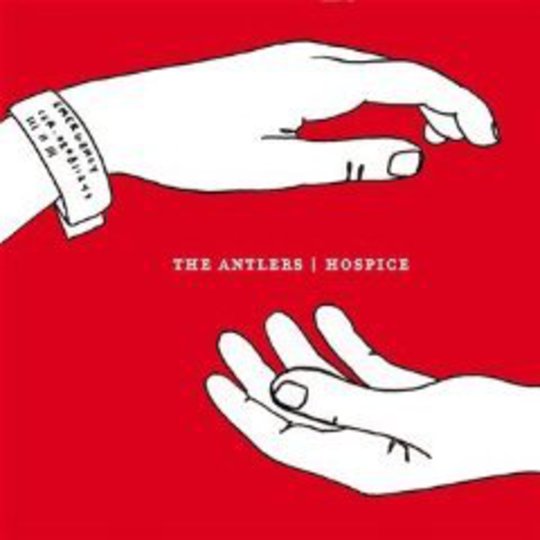 Even if you had no information about the concept behind the record, you’d guess there’s some personal backstory lending weight to Hospice, the debut album from The Antlers; making the moments of quiet as imperative as the loud. Hospice is an album of white walls, long desolate passages, and sudden blitzkriegs of high emotional drama – it’s not always comforting, but the players are hyper-attentive to the nuances of each note and lyric.

Lyric-wise, main Antler Pete Silberman has re-fashioned the life and works of Sylvia Plath, grafting them onto the story of a terminally ill child visited by a ghost. So far, so Jeff Mangum. If you download the libretto (the PDF’s available from the website), you’ll see that he’s done this pretty smartly. Sure, Plath was always about the evenly measured lines, the slant-rhymes when she couldn’t force a full rhyme, but that doesn’t cheapen the concept. Plus we already know her story as well as her poetry. We know when it’s being manipulated irreverently, as if to say 'Yeah, I know, I’m reading Plath again… but there’s a reason we come back to the classics,' hence the gallows humour in lines about “sticking your head in the oven (again)” (from ‘Sylvia’) or using the winch dropped by a rescue helicopter as a noose (from ‘Wake’).

Yes, Silberman owes a certain amount to Neutral Milk Hotel (who he namechecks) for his oblique approach to his influences, for the distorted wall-of-sound climaxes, and perhaps even for a reclusive role model. Still, he comes up with his own surprises, like the ambient fug built up from record-crackle, and the rhythm generated by sampling breath-sounds, on ‘Wake’. As a guideline for the vocals, the music tends to be straightforward stuff: a couple of strummed chords on guitar or autoharp, or simple piano melodies with rising drones beneath them, all before the brass swells up, and bleeds together with the guitars, at the crescendo. In a sense, you’ve heard much of this before: on those early Okkervil and Shearwater albums, on Timesbold’s debut, or Bright Eyes prior to I’m Wide Awake; in each case, while the bands (that Antlers resemble) were mastering the art of writing narratives that flow, and the musical innovation was necessarily confined to textures rather than melodies. Differentiating themselves from the above, Antlers construct crackling, drifting, ambient soundscapes, reminiscent of Belong, Grouper, William Bazinski.

If you’re wondering whether you need this, try not thinking in terms of 'influence'; it makes more sense to think in terms of 'massage' (you know – in the French poststructuralist sense, not the 'Thai Sensual-' sense). That you restore health and vitality to the same basic body of work (i.e. the canon of great art) by applying subtle pressure to those ideas at different points, until you restore circulation; that it’s not about synthesising a new wonder drug, to get things working, but feeling how the parts inter-relate that were already there.

This is what artists do. As well as re-shuffling the deck of influences and instrumentation, for a new/old way to rock out, they also re-orient you by the archetypes of your time. Where the supposedly 'modern' rock song intersects with 'traditional' healing rituals is in the swirl of images that may not be new, individually, but remind you that you’re on a well-trodden path. This year, Sam Jacobs (as The Flying Change) released a magnificent album to do what the doctors literally couldn’t, for his sick wife, while Shearwater (on Palo Santo, and several songs from Rook, last year) used the drama of Nico’s life, and the symbolism of her art to ask how and why we turn the one into the other. So, Yes, you’ve heard much of this before. That’s a good thing, in this case.