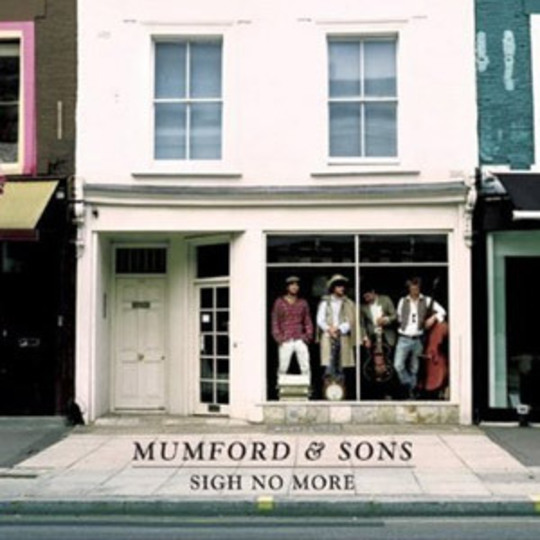 Let’s not bother with too much of an introduction or prelude to Mumford & Sons’ debut, Sigh No More, and instead cut directly to the fundamental problems with the record. It’s dull. It’s limp. It lacks character. It has more than a little of the try-hard about it. Despite this, much will be picked and playlisted on the BIG radio stations across the land. Jo Whiley is kicking herself she can't hammer it to death every morning. Fearne Cotton probably will. They're even looking likely to surprise with a high-end chart position come the end of the week. Yet, there’s an appeal deep somewhere; this is almost an anomaly. This is not so much an irretrievable mess as... a salvageable one.

Now for the positives. What is done well – to a certain extent – on Sigh No More are not the epic faux-downs, with which we are overindulged, but the understated and bare-bones harmonious efforts. If you like your folk expansive (think Fleet Foxes...) you may well get a fair few kicks throughout the record's 48 minutes. They may be gentle kicks, but toe-pokes nonetheless. ‘Timshel’ is an exercise in the above practice – it being the most simplistic, least ambitious and most stripped-down thing to be found and, as a result, it stands out as the finest. ‘Thistle and Weeds’ too eschews the overpowering unity in favour of bleak, minor-key sparseness, to palpable effect. Sadly, annoyingly and frustratingly, other points such as the title track are watery in substance beyond redemption.

Although lacking in impact, the individual elements are not especially poor – songs are written and constructed well, the instrumentation is there or thereabouts, and variety exists. But when pieced together, part by part, it all becomes almost impenetrable, emotionally or musically.

The stumbling blocks which litter this record from start to finish are quite likely to be the same aspects and angles which some will find the most appealing. One irksome criticism from press and public alike is of the band’s upbringing. Too much has been made of the background – I am unable to comment, assumption being the mother of all fuckups and all - but, whatever the case, it’s a moot point, especially when there are greater problems.

This is not an attempt to undermine any fans Mumford & Sons may have, more a half-arsed dig at the situation at hand. Said situation is the perennial issue of a record being an 'acceptable' and clean version of the music that band/artist in question is said to be influenced by or are part of. In Mumford & Sons we’ve an act who are, at least ostensibly, a folk band but the comparison that somewhat clumsily pops into the head is Nickelback. Nickelback. Nickelback. Mumford & Sons seem to be to folk what Nickelback are to grunge. This thought is a constant thorn in this listener’s side, even through the record’s brighter moments, notably the anthemic ‘Little Lion Man’. The remainder, however, blends into a grey mess of acoustic guitars, brass, banjos and overwrought earnestness.

It may be the case that Marcus Mumford and co. recover astoundingly from a less-than-overwhelming debut with a release that is twice as good next time round. In fact, if they manage to tone it down by, say, around 15 per cent and reject the sparklingly clean niceness which abounds, it’s almost likely. This happened to fellow Brit-folkers Noah & The Whale, whose debut, Peaceful The World Lays Me Down has been exceeded significantly by this year’s The First Days Of Spring. That band too had radio appeal and acoustic guitars. Despite any popularity which may come their way, what Mumford & Sons have produced in Sigh No More is nothing more than an empty shell of a half-decent record.