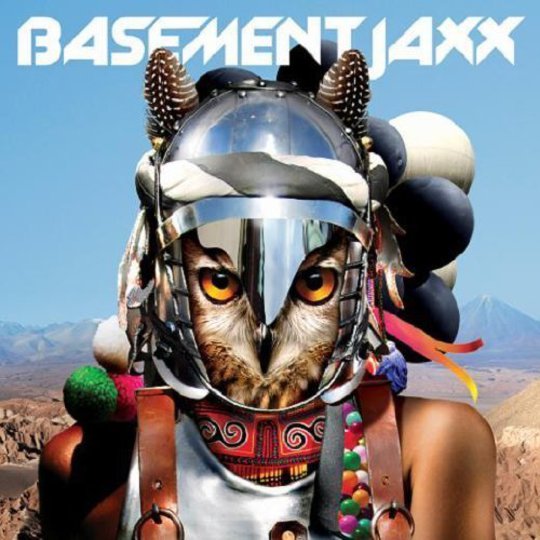 Basement Jaxx's Scars arrives after a troubled gestational period, with the duo citing numerous changes, both personal and musical, as leaving them feeling 'a bit lost'. After four albums and with many of their contemporaries having faded from the public view somewhat, it seemed that the Brixton duo had reached something of an impasse. Having dabbled with a darker minimalist sound, it was as recently as the turn of the year that the duo decided to up the positivity, citing their hearing of Dizzee Rascal and Armand Van Helden's 'Bonkers' as a inspiration for this change.

Consequently, lead single 'Raindrops' was intentionally written in the mould of singles like 'Romeo' and 'Red Alert' etc. Perhaps naturally, it's no revelation musically, but it is undeniably great dance-pop; arriving on waves of fuzzy synths, subdued bass-heavy verses bursting into a typically catchy chorus that is at once glistening and pounding. Disappointingly it is the only track to feature the band's Felix Buxton on lead vocals, as he is easily the equal of many of the guest vocalists. Despite being heavily auto-tuned he provides one of the album's most sensual moments when he proclaims "Your moisture drips upon my lips just like a waterfall straight through the heart of me".

Follow-up single 'Feelings Gone' is a sumptuous up-tempo ballad dripping with sentimental string samples and a surprisingly affecting vocal from Sam Sparro. It's the first track in a trio of early-to-mid album tracks which demonstrate that Basement Jaxx didn't completely forsake the melancholic roots of Scars. 'My Turn' sounds almost like one of guest vocalist Lightspeed Champion's own, the marriage between taut distorted synth bass and his genteel acoustic picking sounding suprisingly natural. The beautiful 'A Possibility' features gossamer-delicate slide guitar that may fool you into thinking you are still listening to Lightspeed Champion, although vocalist Amp Fiddler utilises more soulful intonation while the languid pacing coupled with electronic tics recalls Sophtware Slump-era Grandaddy.

It's a typically expansive roll call of guest vocalists to match. The album opens with the Timbaland-indebted title-track featuring Kelis, Meleka and Chipmunk. That's two vocalists too many, and the song lacks a focal point, but the emphatic low-end, crisp beats and irresistibly sweeping choral-synths win out in the end. 'Saga' is a successful experiment in crossing grimy synthetic breeds of dancehall and ska with Santigold sounding suitably embittered for a track which Buxton says he wrote quickly as an act of mid-separation catharsis. Of the lesser-known guest spots the decision to get Lisa Kekaula (of The Bellrays) to purr over Junior Boys-esque blocks of hazy synth and crisp frigid rhythms was particularly inspired.

Inevitably there are a number of less successful tracks. Paloma Faith's sassy vocal contribution on 'What's a Girl Got To Do?' feels forced and the cabaret music further makes Faith sound unfortunately like the fourth Puppini sister. 'D.I.S.Tractionz' boasts fantastic string/vibraphone interplay, but is let down by singer Jose Hendrix's lack of presence. The highest profile guest slot is undoubtedly Yoko Ono; the stridently simple beat, driving bass and aqueous synth washes make 'Day of the Sunflowers (We March On)' one of the musical highlights and Ono's chanting on the chorus is infectious. Unfortunately her nonsensical rantings about "20,000 fishes flying down from the sky" on the verse will make you cringe, whilst her simulation of orgasmic gasping near the song's climax (ahem) will simply make you shudder.

Scars' abundance of collaborators doesn't really allow Basement Jaxx to stamp their personality on the music, which is a shame, especially considering its fraught origins However, perhaps this is a little too much to expect from a duo who specialize in maximalist dance floor fillers and whose boundless energy and eclecticism is a form of catharsis in itself. If Basement Jaxx want to hide their scars behind such easily enjoyable and well constructed pop music, then long may they continue.