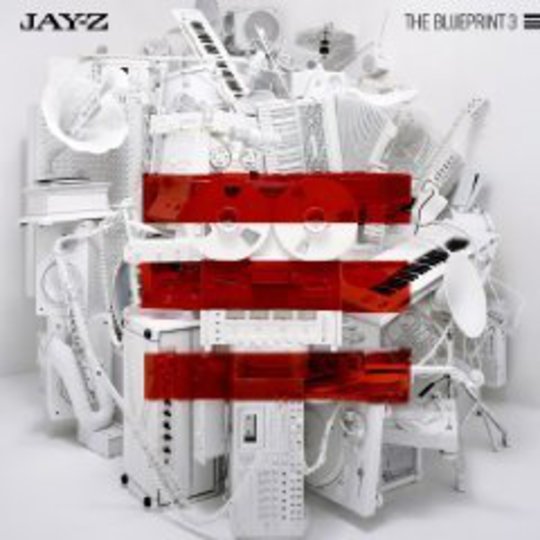 A couple of years ago an Empire of the Sun credit on a Jay-Z album would have meant very little, at a guess maybe a spoken-word poet recommended by Q-Tip to add some Afrocentric kudos. That EotS is the sci-fi pop experiment of Sleepy Jackson’s Luke Steele makes the guest-spot on The Blueprint 3’s opening track 'What We Talkin' About' even more unlikely – and a relevant reminder of a seesawing power industry.

Kanye set a benchmark when he recruited Chris Martin for the chorus of ‘Homecoming’, and previously Jay-Z rehabilitated rap-rock on the mighty Rick Rubin crunch of ‘99 Problems’. Recently spotted at a Grizzly Bear gig, he said: “what the indie rock movement is doing right now is very inspiring… I hope that they force hip-hop to fight to make better music.”

So, is Jay-Z the same hustler who knows how to sell records, or does he simply 'believe in good music'? Most likely he’d support both. Working with Coldplay and Linkin Park obviously expands his audience share, and perhaps the biggest score of Glastonbury was the massive boost to his profile in Britain. And still he can coax maddeningly great beats out of any number of producers. Crucially, he has, at key points in his career, achieved the elusive balance between creative adventure and mass appeal.

Despite arriving at something of a career apex, The Blueprint 3 is no musical highpoint for Jay-Z, falling well short of the original Blueprint. Where The Black Album’s line-up of all-star producers were all bounce and bombast, each battling for a place on the album, on ...3 the same cast seem past their peak. This is particularly true of Timbaland, whose descent into radio R’n’B asks serious questions of someone once considered the most progressive beat-maker on the circuit.

The synthesized paranoia of 'What We Talkin' About' is totally ill at ease with the Skee-Lo-rip of the following 'Thank You', and it is exasperating that two decent tracks have been part-sabotaged with poor track listing. That Kanye and No I.D. co-produce both makes it unforgivable.

Yet on this opening pair Jay’s way with words is as cutting, knowing and humorous as ever: “Grown men want me to sit ‘em on my lap/But I don't have a beard and Santa Claus ain't black”. Even when cruising, the delivery has enough nuance to wipe out his subjects: “I was gonna kill a couple rappers/But they did it to themselves/I was gon' do it with the flow/But they did it with their sales.”

‘D.O.A. (Death of Autotune)’ calls time on the tired trend: “Get back to rap/You T-Pain-ing to much”. Kanye, whose 808s & Heartbreak used autotune as an artistic instrument, sends himself up with a chorus hopelessly out of tune – and no machine to put it right. 'No I.D.'s beat is an infectiously distorted riff wrenched from a free-form clatter, bringing Jay’s crisp delivery nicely into focus.

Elsewhere, Rihanna-assisted number one single ‘Run This Town’ is a rather pedestrian plod, while the Alicia Keys-bolstered ‘Empire State of Mind’ might shine on a Radio 1 playlist but few places else. The thug-rap of ‘As Real as it Gets’ is an easy highlight in a fug of mediocrity. A big, bolshy, Forty-in-the-air club anthem in the mould of Flashing Lights, Young Jeezy is unencumbered with the associated baggage of being the Best Rapper Alive.

For all the allusions to new musical horizons there is little out of the comfort zone here. Of all ten guest spots, only Empire of the Sun are beyond Jay-Z’s realm of familiarity. Nor do any offer real revelation, the well-established Young Jeezy and ROC Nation signup J Cole the notable exceptions.

If any shards of expectation are left (anyone with half an interest will have most likely heard one of the many early leaks), The Blueprint 3 does slip into something of an understated groove as it wears on. Alas, understatement isn’t something we expect from Jay-Z and it underwhelms here.

American Gangster was the last time we saw the real Jay-Z – soulful, lyrically adept, his narrative streak reborn with a newfound alter ego – but here he is back to treading water. Still, with his back-catalogue, live-show and worldwide-profile, such objections really are inconsequential – Jay-Z will no doubt carry on in typically unflappable style.