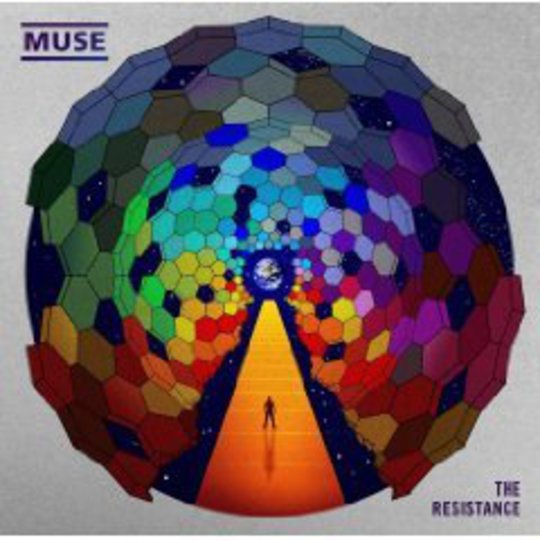 You’ve already made up your mind. I can feel it from your disinterested scanning of my words, the upturned sneer or grin as a certain sentence catches your exact sentiments. I can just see you poring over the contents of the record with either barely contained enthusiasm or in hysterics at the bombast Muse have pumped into this, their fifth album. In this climate, where even the most high security anti-leak measures have failed, and major press outlets have already streamed the entire record for fans to hear anyway, my position as reviewer on high feels pretty redundant. I wonder if Muse ever feel like this? If they look back at their impressive rise from innovative indie-rock curios to mammoth stadium rock captains, does it cross their mind that they’ve unintentionally said all they needed to say and are now cruising on autopilot? Or are they basking in their ability to mutate genres at will? It’s impossible to say without asking them directly, so all we have for now is The Resistance as evidence of how a thoroughly deserved success story’s epilogue plays out.

Released as a free download in July, ‘United States of Eurasia’ was Muse’s attempt to shock everyone out of the prog-slumber they fell under after Black Holes and Revelations. The impact was not exactly felt across the world – some shrugged, some were disgusted, some heralded it genius. My feelings, within the context of the album, are that it’s brilliant fun. Playful, ridiculous, completely Queen-inspired and stretched to breaking point with Turkish melodic scales, fuzz bass, waltzing piano, massive vocal harmonies and that murky ambition lurking just beneath the surface. As a doorway into The Resistance, it’s perhaps the most appropriate. Everything you expect from Muse is plunged deep into that song, and that much is true of the album as a whole. It’s the flirty twists throughout that may bewilder the uninitiated.

Delightfully, they don’t give you a smooth ride. First we have the pseudo-space funk of ‘The Uprising’, followed by the R&B worshipping of ‘Undisclosed Desires’, before the jaunty speed-tango of ‘I Belong To You’ and the core riff-outs of ‘MK Ultra’ and ‘Unnatural Selection’. That listeners will eventually accept these songs as part of the natural aural tapestry on display is perhaps testament to Muse’s past experiments, some of which were more successful than others. Admittedly, my initial listen (at a highly secure listening party at the top a skyscraper where there was no escape) prompted recoil, but as soon as I hit the safety zone of ‘Guiding Light’, everything made sense on recurring listens. ‘MK Ultra’ is scintillating and stunning in its effortlessness. Those torrid guitar arpeggios, the chilling Zelda-like strings, the seductive vocal range – this is Muse hitting their stupendously high peaks. That the equally fearsome ‘Unnatural Selection’ positively flies by at over six minutes is a reminder of ‘New Born’s’ blitzkrieg impact back in 2001, and that they’ve helped change modern rock music in ways that could easily pass us by.

Languishing smugly at the end, attempting to slap that silly little smile off your face after the hilarious clarinet solo on ‘Mon Cœur S'ouvre à Ta Voix’, is Muse’s long-anticipated, and overhyped three part symphony, ‘Exogenesis’. As a piece of classical composition, the first part, ‘Overture’, is no doubt a fully-realised achievement for the classically trained Bellamy. The suspenseful and stirring intro, with its foreboding background bass crescendos promise much as it leads into the main theme. A decadent war-like waltz strikes up as Bellamy’s falsetto glides across before the guitar histrionics begin. After that it becomes a fight between predictability and atmosphere. Wrenching between stunning piano runs and more stilted Muse balladry, it begins to sound uninspired. ‘Redemption’ has a faltering ‘Moonlight Sonata’ theme that blinks out in the face of Bellamy’s vocal insistence, but the build up throughout is well composed and surprisingly restrained. However, despite a level amount of peaks and troughs, it remains the record’s biggest disappointment.

That aside, The Resistance takes it upon itself to set out exactly what Muse are about and the conclusion is this: they plough every furrow of modern pop music and seed it into their already competent and enjoyable vision of futuristic prog-rock. This is why, after initial misgivings, this record begins to settle as a thoroughly enjoyable listen. Muse’s talent is in bringing classic rock clichés, ‘Telstar’ synth work and bounding bass lines together into a salubrious, and slightly silly, faux-political anthem. They feather familiar melodies with echo, tremulous drums and harmonies that sound like vocoders. They poke fun at the stick-in-the-mud serious musos with their delicious, violin-plucked take on heavily produced soul.

This has been their singular talent since the excellent Absolution. It’s possibly why we don’t find another irascible ‘Knight of Cydonia’ here. They’ve realised that in pushing the prog template into areas of ridicule, as they did on the previous record, they temporarily forgot that pop music is far richer in its sonic possibilities. That they’ve re-discovered this, and explored it far more bravely this time, is this record's greatest achievement. If only they could have transfused the effort drained from the composition of ‘Exogenesis’ into even more striding, storming pop – or, far more interestingly, melded the rest of The Resistance into a full symphonic record - we could’ve had Muse’s most exciting release to date. As it stands it’s an indulgent and, at times, gorgeous listen that merely helps restate your concrete opinions about Muse. So, in the end, does it really matter what I think?