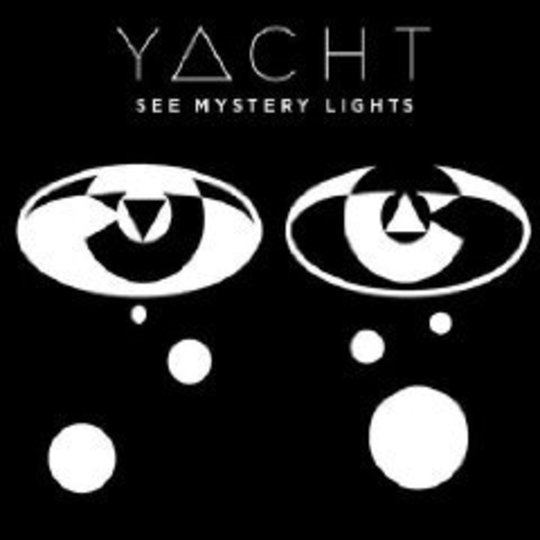 Religion likes big social signs. Whether it’s the Polyphonic Spree massing around creepy sunshine harmonies, the clean smell of a Contemporary Christian Rock drifting from a mile off, a mad murderous Manson scrawling in shit on a wall, an aging Dylan publically proselytising, or Brother Danielson playing live dressed as a Christmas tree bearing the nine fruits of the Holy Spirit; religiosity as a social performance tends to rely on a sign-world of exaggeration to demarcate it from the heathen remainder. And the more grand and otherworldly the signs the more they might embody and convey what Dostoevsky had his Inquisitor call the ‘miracle, mystery and authority’ that religions so often seek to wield over the human world.

Surprising then that Jona Bechtolt, dear to many as humble synth-merchant behind K Records’ The Blow, a man with no prior inclination to convert anyone, should produce under his semi-solo guise YACHT an album that deals almost exclusively in religious themes, spirituality and the afterlife, delivering pointed metaphysical questions and mantras with an almost evangelical zeal. And do all this while dressed up as nothing more than a twee party album, in the minimal and flimsy garb of hipster-friendly electropop.

To look at the band’s visual aesthetic there are scant few pointers as to their persuasions. At live shows Bectholt and (a new member for this, YACHT’s second album proper) Clare L. Evans employ backdrops of clean spinning triangles, which if you squint imaginatively could appear like a kind of trigonometry-based powerpoint version of Temple of Psychic Youth. The cover of See Mystery Lights might invoke alien runes, but just as likely sketches for aboriginal art at an East End gallery. The cover of previous album I Believe In You. Your Magic Is Real, with its bright lit hand in white glove could be a set of divine digits, but looks more like an MJ reference. They dress like modestly geeky hipsters and the myriad religious links on their website are decked out in nothing more than unadorned hypertext.

And the same goes for the music on ...Mystery Lights: a generally rambunctious mid-fi indie electropop sitting at an odd remove from the band’s devotional cause. While spiritual ideas in indie are often conveyed in epic shifting patterns and shapes, damascene changes of mood and colour, this fidgety mass of ideas coined from a decade of programming renders the album more like a twee synth ecology of the sort peddled by DAT Politics, Au Revoir Simone or Sin Fang Bous.

Grounding the sound is an LCD Soundsytem approach to snide flat electro, but distinguished by a beaming lack of cynicism (reportedly the track ‘Summer Song’ was recorded as an ode to James Murphy, a passport to the DFA roster, which may or may not have thrilled him, sounding as it does as though he could have written it himself). ‘I’m In Love with A Ripper (Party Mix)’ reaches further back to the electro heritage of Bambaataa or Eygptian Lovers, squiggly leads riff with body-popping nervous tremors of synth bass over handclaps and beats downsized to TR808-like proportions, and posits YACHT, for a moment at least, as tongue-in-cheek revivalists. The Blow is affectionately exhumed for the final track, a wonky acapella reprise of Psychic City, complete with bitcrushed Mortal Kombat ritual punch samples (“Hooyah!”).

It’s all fun, and doesn’t sound like it might start any world wars. The only actual clue to the album’s religious themes is the singalong indie-spiritual furrow they veer into on tracks like ‘Ring the Bell’, ‘Afterlife’, ‘We Have All We Ever Wanted’, and ‘Don’t Fight the Darkness’. Here they come off like a Brooklyn-based Spiritualised or Arcade Fire covering Blur’s ‘Tender’, and forge the only reasonable connect between the music and the message.

And the message is singular. The album’s opener ‘Ring the Bell’, a baggy gospel anthem pulled directly from Screamadelica era Primal Scream, features a ragged chorus of ecstatic voices singing repeatedly “Will we go to heaven or will we go to hell? / It’s my understanding that neither are real”. By asking the question, and dismissing the Christian answers, hanging in the air remains an ask for the listener to derive their own afterlife alternatives - a bit like their version of the Alpha Course, but instead of stilted conversation, there's maracas, handclaps and gated vox dribbling up to trenchant ‘whoops’ and ‘woos’. Subsequently ‘Afterlife’, the chorus of which tongue-in-cheekily lifts Bob Marley’s reggae choral chant of ‘Israelites’, begins as critique of North American secular myths of eternity - “Hail to thee / land of heroes / it’s all yours when you’re dead and gone”. Invoked is “the blood of martyrs” as the mythical and politicized means through which citizens of the freest nation in the world might live on after death as big marble statues. YACHT refuse this heritage - their otherworld is not to be reached materially, as later in the song they reveal, over a cowbell that has the distinctly material sound of a fire alarm being thwacked with a broken pencil, the afterlife is “not a place you go, it’s a place that comes to you, and it’s not about who you know or who is in your heart”. Apparently there are more things in heaven and earth, secular listener, than are dreamt of in your philosophy.

While 18th century philosopher-hero David Hume dismissed spirituality as a libidinous thrill, grubbed from a consideration of the paranormal, YACHT are clearly not above getting filthy. ‘Psychic City’ cites voodoo and psychic living as urban realities, a sort of peripatetic psychic drive-by in the guise of a Kim Deal-penned Pixies anthem, and joyous single material to boot. And while most of the album is directed at the atheists and materialists, ‘Don’t Fight the Darkness’ sees the Manichean worldview getting a swift kick in the gospels, as they enjoin us to find subtlety, singing “don’t fight the darkness with the light and darkness”.

I once tried to join the Scientologists for a day while working for my university newspaper. They lured me to a plush central London location with implicit promises of seeing 4channers tortured and BBC journalists goaded to verbal explosion. At least to see Tom Cruise standing at an altar fashioned from alien money, maniacally wielding a virgin above the bare midriff of a serene-looking Beck. But all that actually transpired was that a shabby man in an ill-fitting suit and worse-fitting smile tried to sell me an unreadable book. For someone expecting to witness a spiritualism dressed in contemporary glamour, big smiles, hyper-normality with a covert devout agenda, perhaps even to create a bit of a party - it was a disappointment. Unexpectedly, where Scientology falls down, YACHT step up.