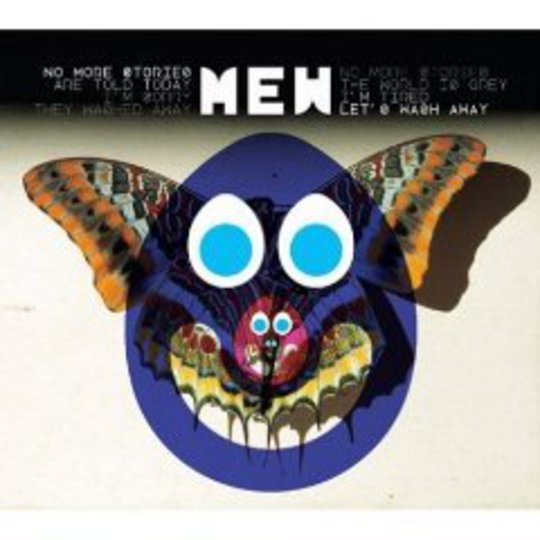 Where to begin with a new Mew record? For over a decade they’ve turned out a heady concoction of rock music, flirting with shoegaze and progressive tendencies while maintaining an ethereal charm increasingly their own. Though their feet dangle in waters grandiloquent, they’re far from being swept away; if anything, 2005’s seamless And The Glass Handed Kites exemplified their ability to match pomposity with a surprising level of elegance. Laced with cloud-scraping choruses and delivered with brio uncommon, the dogged self-belief at its core rendered any charges of ostentation beside the point. When you’re dealing with ambition of this nature it’s best to buckle up and enjoy the ride rather than check the tank or test the brakes, because really: where’s the fun in that?

‘Cause here’s the thing: No More Stories is, at heart, a lot of fun. Never mind that its full title is both a) ^a poem^ and b) a bit bleak; that it’s threaded around two short instrumental breaks (or intermezzi); that its centrepiece is an epic, five-songs-for-the-price-of-one genre-buster, or that an air of melancholy hovers about it – it’s fun, and bizarre, and brilliant.

Take first single ‘Introducing Palace Players’, and the barmy sci-fi awesomeness if its video, in which a group of metallic cubes careen around a mist-enshrouded Danish woodland. All syncopated beats, spiky riffs, bursts of laser synth and upbeat vocal (I dare you not to suppress a smile upon hearing Jonas Bjerre’s breezy “We know so much / So much, we do”), it’s a pleasure through and through. Elsewhere, opener ‘New Terrain’ positively kicks with gut-rumbling life, its chopped-up vocals the best clue that playing it backwards (!) reveals a new composition entitled ‘Nervous’.

Following mid-point ‘Cartoons And Macramé Wounds’ (an unashamedly massive, metamorphosing, Eighties-inflected sprawl) come the ‘Hawaii Dream’ and ‘Hawaii’ pairing. The latter sees the title poem echoed by ivory footsteps over a gorgeous, ambient glow in a manner at odds with the preceding’s excess and all the more successful for it. ‘Hawaii’ similarly embraces a more colourful palette, skipping merrily along before a big, icy chorus materialises out of nowhere. It’s impressive stuff, though blunts the song’s impact a touch. Everybody knows Mew can do epic – heck, they do it better than almost anyone – but it would be nice to see them do sweet a bit more often, too.

Swapping the elemental for the intimate is something they do accomplish however, occasionally in the same song. The closing ‘Reprise’ hits like Eighties glitterball disco (à la Donnie Darko) before dissipating into a stately push of guitar and keys. This evaporation of the quiet-loud template is another trick often employed: ‘Sometimes Life Isn’t Easy’ veering from cacophonous opening swell to banjo-led bridge to standard (ish) verse; later a children’s choir (from the band’s old school, no less) help out on vocal duties for a chorus of sorts, before it all dissolves amid spectral torrents of voice and sound. It might sound ridiculous (it is a little ridiculous) but it plays out beautifully. ‘Silas The Magic Car’ also offers welcome respite in the face of atmospheric overload, and although the vocal remains as abstract and drenched in reverb as to be nigh-on-undecipherable, its plaintive turns (“maybe we’ll get out somehow”) do relay a melancholy that persists throughout. Tempered with optimism elsewhere, here it’s left to brood with delectable effect.

Conversely, ‘Beach’ and ‘Repeaterbeater’ both clock in at a punchy sub-three minutes apiece, the former about as straightforward as you’re ever likely to get from these Danes, the latter bookended by a mighty old dirty riff. Not for the first time, the trio resemble a certain other three-piece – united by an unapologetically muso level of proficiency, space-age concerns and a penchant for the grandiose.

Like Muse, Mew fly in the face of the zeitgeist, cultivating a devoted following all the while. It’s one that should be sated (and in an ideal world, expanded) no end by No More Stories. ‘Big’ in every sense of the word, if it doesn’t quite reach the impassioned heights of Kites in terms of sheer spectacle, it certainly comes close; that it sees them tread towards something warmer and intangibly more personal in its outlook more than compensates. Absolutely intoxicating.