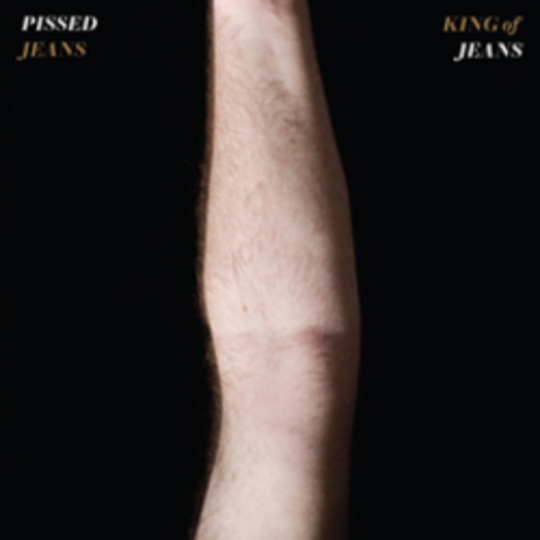 It’s always a bit dirty when a music writer feels the need to crib from an official press release, but the accompanying words with King Of Jeans had one sentence so perfect that it just had to be quoted wholesale. Whether it’s testament to whichever bored PR hack at Sub Pop came up with the following sentence, or just to Pissed Jeans themselves is up to you to decide, but really, there is no better sentence for summing up the band’s trajectory up until now:

Shallow was Pissed Jeans coping with moving out of their parents’ homes, and 2007’s Hope for Men their initial reaction to the mechanical lifestyle of a wage-earner, King of Jeans is their formal and uneasy acceptance of adulthood.

The reason it’s bang on the money is twofold. Firstly, the metaphor of growing up exemplifies the fact that Pissed Jeans are one of few current bands who seem to go from strength to strength with every release. The brashly titled King Of Jeans is the newly-expanded quartet’s third longplayer, and to say it’s their best yet is an understatement. Shallow was a brattish Technicolor vomit of an album, chaotic and brutal like Flipper at their most depressing, but with a dash of dark humour. Hope For Men was My War sludge from the perspective of a nine to five knuckle dragger and one of the albums of 2007. But King of Jeans is the real deal: bigger, bolder, smarter, funnier, harder, faster.

That much is evident as soon as 'False Jesii Part II' kicks in with a jackhammer riff like Tad at their finest, as the drumkit thumps and thuds. And then Matt Korvette’s signature howling vocals kick in. He half spits and half hollers “I could match you drink for drink… but I don’t bother” with that sleazy howl of his, and you feel like singing along. The track is easily their most accessible to date, but it doesn’t seem to compromise any of their hard edges, a pattern which is repeated throughout: see the saucy swagger of ‘Lip-Ring’ and the queasily lumbering ‘R-Rated Movie’.

Secondly, the album serves as a brutal, visceral portrait of the ‘normality’ of the nine to five. Korvette has improved his lyrics: he’s still able to make you feel stomach-churningly uncomfortable, but he’s augmented his bitterness and blunt depravity with the kind of things people can relate to: stress, work, tiredness, futile workplace crushes and age. It’s not completely unexpected – Hope For Men displayed similar tendencies – but what's shifted is how well he captures his subject matter. He’s no verbiose chronicler, but he has a canny knack of picking the right line. 'Dream Smotherer' might be an ear-shattering slab of molten guitar and thumping basslines, Korvette howling about plastic smiles and buttoned shirts, but as it winds down an incredible array of whining notes are coaxed from a six string, Korvette pleading “I will help you make ends meet, if you will let me get some sleep”. His delivery is as ever, painful: whether yelling like David Yow or coquettishly toying the words like a broken drag act.

Musically, there’s little change in tone – hard-edged sludge guitars and ear-wrenching feedback a la Scratch Acid with some wonderfully bent shredded solos dominating the afore mentioned 'Dream Smotherer' and the whining, pleading howl of a lonely guitar picking out light(er) moments such as the slow burning foreplay of ‘Request For Masseuse’. The rhythm section is definitely second fiddle to the snarling vocal and guitar performances on display, but that’s perhaps a measure of just how tight they’re sounding these days.

But the best feat of musicianship accompanies the album’s centrepiece. ‘Spent’ is a seven and half minute trip into the black and back – opening with a lone twirling guitar that matches Greg Ginn at his most gnarly and filthy – during which Korvette reveals just how good he really can be over a mournful drumbeat and hulking bass riff, before the guitar kicks into overdrive. “I slept for eight hours/And woke up tired/Thought about my desires/ That I’m too nervous to try”. As the song dies slowly, panting “spent, spent, spent” and echoing feedback, my first reaction is that not since Rollins left Black Flag has anyone produced such a sickening display of musical brawn and lyrical desperation been displayed.

And though others will point at the Sub Pop ex-roster as prime influences here – alongside the dumb/clever brutality of much of Amphetamine Reptile’s back catalog – it’s Black Flag’s My War and the ensuing sound of band breaking at the seams that King Of Jeans most reminds me of. There’s the same pent up aggression and wall of sound production, but Pissed Jeans have taken that blueprint and given it grunt and bite, via Korvette’s insurance-salesman-by day-everymanism and Bradley Fry’s knack for turning guitar sludge into genuine riffs. Thankfully for us, Pissed Jeans show no such signs of disintegrating due to the drugs and infighting that claimed Ginn, Rollins and co; King Of Jeans has set the bar high not just for them, but for anything ‘heavy’ set to be released this year. And as Korvette bemoans the loss of his hair on closer 'Goodbye (Hair)', so I tend to bemoan the end of this album: “When I say goodbye/I’ll say it with a frown”. Thing is I can always put it back on; I’m not sure Matt will have the same luxury.