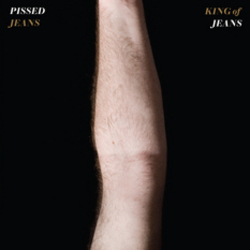 It’s always a bit dirty when a music writer feels the need to crib from an official press release, but the accompanying words with»

if 2005's 'shallow' was pissed jeans coping with moving out of their parents' homes, and 2007's 'hope for men' their initial reaction to the mechanical lifestyle of a wage-earner, 'king of jeans' is their formal and uneasy acceptance of adulthood. pissed jeans went ahead and made one hell of a rock record. working with renowned producer alex newport (who holds a fudge tunnel pedigree and has worked with such luminaries as at the drive-in, the locust and sepultura), pissed jeans have pushed further to the raw, minimal core of heavy rock music with 'king of jeans'. music doesn't get much better than this!
description from www.roughtrade.com