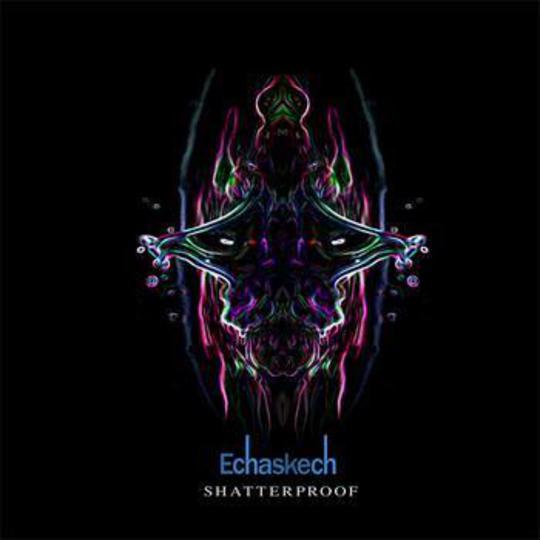 Two knobs, a grey screen surface manipulated by black lines, a bright red plastic edge and the wonders of childhood. Anyone who hasn’t played with an ‘Echaskech’ (and I apologise if it isn’t pronounced like the toy in advance because I refer to it as such pretty much throughout), you have missed out on the golden simplicity it has to offer. No pen or paper necessary, all you needed was the glee stemming from some creative muse and the ability to manipulate very undemanding machinery. If you went wrong once though, you would have to start completely from scratch, probably with a completely different picture.

Echaskech’s musical compositions are similar to the processes of their toy semi-namesake. While you’ll feel like you have all the freedom in the world, there are still limitations to what can be created and interpreted with the real thing. The angles are all formed through the linear drawings (in this case, the arrangements of the songs) - it’s all very straight and then suddenly tangential. Manoeuvrability of melody within each track is minimal, but it's the only minimal thing musically here. Otherwise, you’re having the time of your life with those pictures.

The weakest tracks on Shatterproof are dispensed of at the beginning, leaving quite a dislocated feeling initially. Opener ‘Shatterproof’ seems too slow of a burner to ignite the album as a whole and single ‘Future Sex’ treads a line very close to sounding exactly like Modeselektor's ‘Sucker Pin’, only with added vocoder slang that feels really out of place. Both of these tracks sandwich ‘On Your Mind’, which leave that track almost redundant without further listening.

But, go back and combine it with tunes like ‘The Storm’ (preluded by ‘The Calm’,) and ‘Low Pressure’ and Echaskech display proficiency very much akin to the likes of Apparat, Ellen Allien, Modeselektor etc. Every track has kicks and bass that roll up and punch you in the stomach with the precision of only the best metaphorical black belts. The arpeggiated and delayed synths manufacture luminous images in the ether as well as that ever present-notion of worldwide auracular domination – a must for an album of such meticulously-produced depth – while the glitch-ridden nature of it all makes the mind jump around with the body flailing along in a harnessed chaotic manner.

The melodic dischordance of ‘Digital City’ dances along blissfully but is trimmed by the well-paced break of ‘She Likes Colour’. This pairing is a great example for the album’s diversity throughout. By the end of it, the jolts of imagery suddenly become much clearer and much better to look at as a whole. But you will probably have to start again to uncover its true potential.

If Shatterproof were to be made on that plenty aforementioned toy, it would be the equivalent of wiping three attempts at drawing a house then, on the fourth, even the flowers and grass are drawn in beautifully. Practice makes perfect.