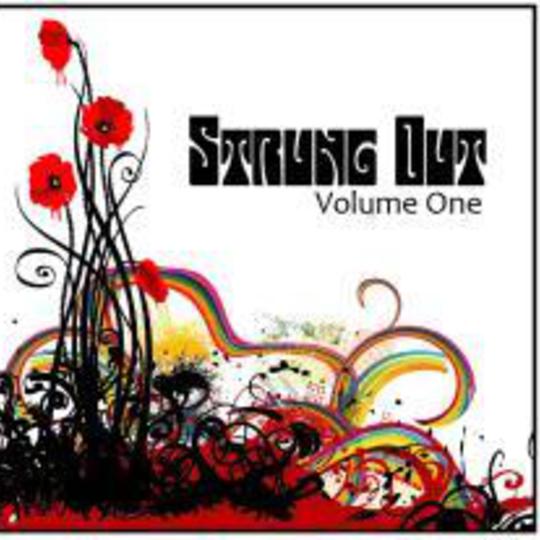 While the current industrial climate can hardly be considered a prosperous time for many small retail outlets, it's heartwarming to know there are some underground labels kicking against the system as they strive to unleash the best in new music. York-based indie Third Wave Collective have set their sights one notch higher, compiling an ambitious thirty-two track double album that showcases what they consider to be the cream of the guitar-based psychedelia-influenced crop. What's more, a hefty portion of the proceeds from Strung Out go to a good cause, in this case The Kings Kids Home orphanage in Coimbatore, southern India. Of course, that last fact pales into insignificance if the music contained on this two CD collection doesn't meet the required standards. Fortunately, for the most part it does, even if Third Wave Collective do have an occasional tendency to get lost in their eclectic quest to be one step ahead of their peers.

Strung Out pulls together a healthy mix of established acts such as The Brian Jonestown Massacre, A Place To Bury Strangers and Dead Meadow alongside lesser-known and unsigned artists such as Sweet Jane, Lower Heaven and Floorian. While the inclusion of the likes of I Am Kloot, Calexico and Findlay Brown among a host of noise and shoegaze tinged co-conspirators will probably raise a few eyebrows, the tracks culled from each of those artists' extensive back catalogues at least fits in with the theme of the record, none more so than Johnny Bramwell and co.'s 'Deep Blue Sea', a rare b-side first released in 2003.

Indeed, one criticism that may be levelled at the compilers' door, in that for all the foraging of big names here, there's little in the way of exclusives. That said, Darker My Love's 'Summer Is Here' is surely a prerequisite for anyone fond of deep-rooted, Beach Boys influenced psyche rock to go out and purchase their 2006 self-titled debut long player immediately, while the inclusion of Crystal Antlers 'Andrew' should be similarly persuasive in ensuring Tentacles becomes a focal part of the daily routine.

However, the most exciting facet about records such as this are the new discoveries, and in Washington DC's Mono In VCF and their gorgeous epiphany 'Escape City Scrapers', one wonders why this band has been left by the wayside for so long, despite having an equally lavish (and criminally ignored) album to their name also. Likewise, Seattle duo Trespassers William, recently signed to Gizeh Records, serve up the deliciously orgasmic 'Red' and alert several hundred voyeurs to their decade's worth of astounding music in the process. Irish quartet Sweet Jane and the sub-Velvets charm of 'You're Making This Hard' and the swirling paranoia of Silverlake four-piece Lower Heaven's 'Fruitless' go some way towards making Strung Out an essential collection.

Add to this the timeless beauty of Sonic Boom's recent Spectrum collaboration with legendary producer Captain Memphis on Spacemen 3 classic 'Hey Man' and the reasons to invest in this assortment of wares far outweigh those of a negative persuasion. As an introduction to both Third Wave Collective and the numerous participants they've assembled here, Strung Out sets their stall out with purposeful vigour. Here's to a long and successful future...