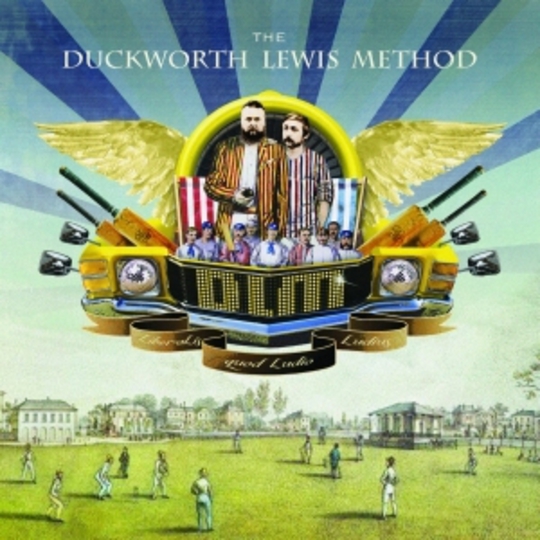 It is now, certifiably, summer in England – and what is more both summery and English than cricket? There can almost surely be nothing. Wimbledon, perhaps, but that's now over. The sound of leather against willow, leather against Brian Close – all of those time-aged, tired and tested clichés. It is then a little bit of a surprise that the first cricketing concept album has been written, produced and devised by two Irishmen, the Divine Comedy's Neil Hannon – who was and still is a man of hidden depths – and Pugwash's Thomas Walsh, under the name The Duckworth Lewis Method.

I have to admit, that when news arrived of this record's inception a couple of months ago I let out a girly scream for the first time in probably a decade and a half. I cannot imagine I was the only one. As this is a record seemingly completely – well 98.7 per cent or so – aimed at cricket lovers, the review will be done thus. I will not even try to explain Twenty20, the 'switch-hit' or any other intricacies of the game in the following paragraphs. If you aren't really 'into' cricket then you might find this album a bit of a head fuck.

One: the duo are named after a highly complicated and often confusing – even for professionals – system for working out who wins a rain affected limited overs cricket game. That tells you much of what you need to know about the level of geekery we are dealing with here, but the record deals as much with the present and future as it does with the game's past.

Opening the bowling is the bumpy and trumpet-y 'Age Of Revolution', which charts the progress of the game from one of Gentlemen vs. Players to one of multi-millionaire superstar players, not quite rags to riches, but somewhere along those lines – or “nearly denied entry by the English gentry / now we're driving Bentlies playing Twenty20”, if you want to quote lyrics. Yet for all the fanfare, it's a little bit too much for a first offering.

But Duckworth Lewis's opus is unquestionable. For all the fun which is had in moderately amusing cuts like 'Meeting Mr Miandad' and 'The Sweet Spot' it's not quite enough to make you stand up and take note, or even laugh out loud – they evoke a “yeah, not bad...” feeling. 'Jiggery Pokery' does all of that and much, much more. When the time comes for future generations and civilisations to look back on the game of cricket, this song should be placed equally along the footage which it chronicles.It is a music hall accompaniment to an almost all-encompassing commentary – from the perspective of Gatting who was bemused as he was rotund at this point in his career – to the event of “The Gatting Ball”. Every verse and turn of phrase is an utter joy to behold and is perhaps the geekiest song written about anything ever since...

'Twas the first test of the Ashes series 1993
Australia had only managed 289 and we
Felt all was going to plan, that first innings at Old Trafford
Then Merv Hughes and his handlebar moustache dismissed poor Athers

Is the opening verse, which sets the scene for you all.

It was jiggery pokery, trickery, jokery,
How did he open me up?
Robery, muggery, Aussie skullduggery,
Out for a buggering duck!
What a delivery,
I might as well have been holding a contra bassoon,
Jiggery pokery, who is this nobody,
making me look a buffoon?
Like a blithering old buffoon?

It's hard to resist the temptation to roll out each and every lyric in this song but, for the sake of brevity, you're going to have to find out for yourselves. It also features Matt Berry and Phill Jupitus bellowing “baboon!” several times. The variation in this record is enough that it ends up feeling like a collection of songs from a musical. No bad thing in terms of a concept, yet we are missing a protagonist.

It is hard to really know if there is a place for cricket concept albums. Certainly there's a time and a place for them and at the start of an Ashes summer is just that - it's perfect timing from Hannon and Walsh. That is not to say that if you aren't a cricket fan that you won't find anything to enjoy – some tracks stand out regardless of concept, in fact some aren't even that rigidly bound by it, see 'The Sweet Spot' and 'The Nightwatchman'. Let us all hope that some of this album, even if it does nothing else, will have put the use of that ghastly 10cc song well and truly in its coffin.