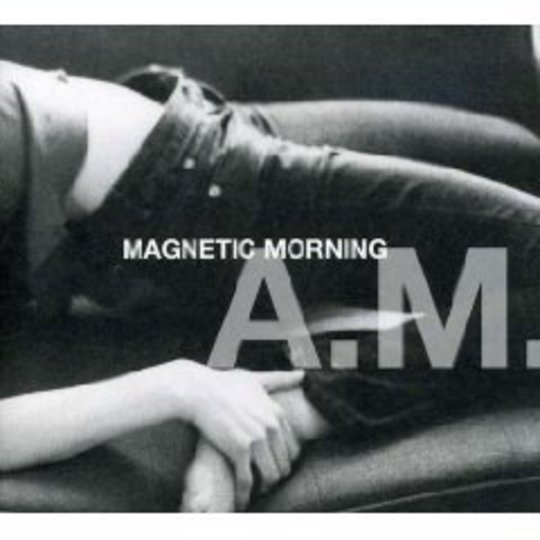 So here we have Swervedriver's voice Adam Franklin and Interpol's drums Sam Fogarino joining forces to create their Duel-ring Captain Planet ("when your powers combine...") in the form of Magnetic Morning.

I'm sorry; I had to get the atrocious pun out of my system. Everything's good, now.

A.M. starts off with 'Spring Unseen' - breezy, mellow and a little bit dark, it'll find you rocking on a hammock beneath a thunderstorm. Initially it's not much more than angry clouds and the distant rumble of thunder, but, by the time the tune ends, the first fat drops of rain have started to fall and through your eyelids you can see the sky bearing down on you. 'At A Crossroads, Passive' goes into greater detail, with a loopily descriptive guitar hook that manages to precisely trace the texture of the raindrops as well as the velocity with which they slam into the earth. 'But it never ends...' you think to yourself as they patter to an abrupt halt. There's the sun, 'Indian Summer' alerts you as it can be seen glowing shyly from behind the still heavy clouds, its rays warming your skin still dimpled by the residual goosebumps that rose in the wake of the now subsided storm.

Hang on - what are you doing in a hammock in the pouring rain? 'Come Back' explains the situation in Franklin's sorrowful baritone: "come back and stay" he whimpers. You're heartbroken, see - this is what heartbroken people do. They sit in hammocks in thunderstorms and drown their sorrow in Loveless as evidenced by 'No Direction', which has a stereotypically-Shields guitar squirming its way to the top of the track.

Right then, enough moping: what you need is some activity to brush those droopy cobwebs out of your brain. Yeah! 'Motorway'! Let's get on it! Woo! "sun is shining with glittering rays," "white stripes and a green edge," "radio on, from the speaker the sounds" - all that is essential for a perfect journey. The view is gorgeous, the road is clear, nothing could possibly go wrong... oh fu-

You're at 'The Wrong Turning.' Trouble is, you don't know which one was it, so you keep driving – aimlessly, this time. The expansive road now results in your mind filling up with those existentialist ideas that you always mean to record but that slip out of your memory's grasp much too soon. Fortunately, all your thoughts culminate in the simple conclusion: How I wish you were here. Repeat to fade and you won't forget.

"And I wonder if I'll see another... highway" you ponder mournfully on the stunning ninth track. The longest on the album, it is worth every second of its six minutes with a sharp, short guitar strung below the vocals at an achingly tempting depth that you just... can't... reach. It lifts you up as it opens and gently lulls you back to earth with its close. Mesmerised, yet?