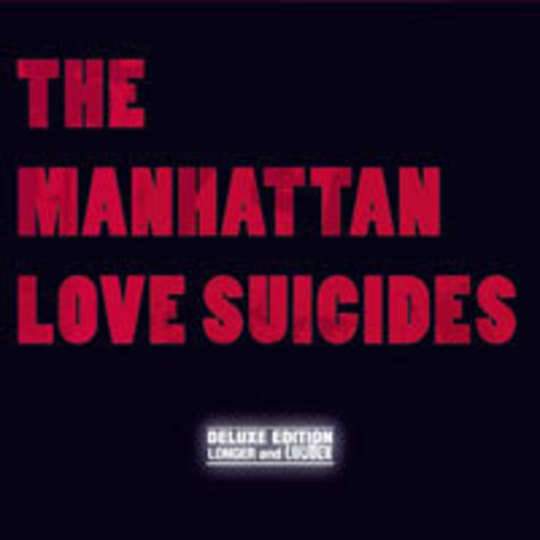 With a sound that pays homage to various corners of the past four decades, Leeds foursome The Manhattan Love Suicides could be accused of being the most retro band on the planet, were it not for the fact they exude both a cool demeanour and buzz of excitement around almost everything they do. Whereas lesser bands find themselves permanently ensconced in a timewarped vacuum that becomes increasingly difficult to escape with every passing day, The Manhattan Love Suicides use their influences to create something all of their own, which may be brimming with reference points - The Primitives and The Jesus And Mary Chain being two - but still sounds completely fresh and unique in the current climate. To dismiss the band as mere revivalists would be missing the point entirely, if only for the fact the four components of The Manhattan Love Suicides probably weren't even born when the seeds that became 'C86' were first being sown.

...Longer & Louder then, is essentially a three-part package: the band's 2007 debut self-titled long player remixed and remastered, along with a second CD of 11 songs culled from various seven-inch singles, radio sessions and demo recordings. The third disc is a DVD featuring 11 videos, some shot live but mostly filmed almost as art nouveau style projects that compliment the visceral diagnostics and energy of the music they accompany (see 'Clusterfuck' for example, directed by the Insect Guide's Stan Howells for absolute proof).

Although criminally ignored by much of the Leeds scene they inhabit, there is no doubting their adverse refusal to fit in with any scene has become an alluring part of The Manhattan Love Suicides' make-up, not to mention spreading a wider influence to the other side world - indeed both The Pains Of Being Pure At Heart and Crystal Stilts cite them as being partially responsible for their mere existence. If their first record sounded strangely out of kilter in the grand scheme of things two years ago, it makes perfect sense now. The buzzsaw pop of 'Things You've Never Done' and 'Skulls' nestling ominously alongside the more poignantly delivered 'Home' and 'Thinking Is Killing Me' like a lascivious sweet and sour cocktail. Early single 'Kick It Back', a prominent staple of their live set right from their humble beginnings a year previous right up to the present day takes on a more forceful presence here, while the gleaming wail of closer 'Providence' resonates with nostalgic beauty, Caroline McChrystal's effortless drawl sounding more anxious and fragile with every note.

The disc of bonus material might be viewed from the outside as being "one for completists only", but don't be fooled. 'Kessler Syndrome' and 'Dirty Knives' are what a car crash between the Buzzcocks and the Reid brothers would probably sound like, while the eerie strains of 'The 10th Victim' and 'Veronica's icy Spector-isms offer an altogether different view of The Manhattan Love Suicides' burgeoning world. Add the fact that Springsteen's 'Stolen Car' has never sounded so haunting, almost like a monochrome b-movie set to music, and it's clear to see The Manhattan Love Suicides aren't just confined to the twee indie ghetto.

If you're yet to discover their music, ...Longer & Louder is a perfect introduction, and even as someone who owns the original pressing of The Manhattan Love Suicides, the two bonus discs here make both fascinating listening and viewing. Let's hope that follow-up album isn't too far away from the finishing line.