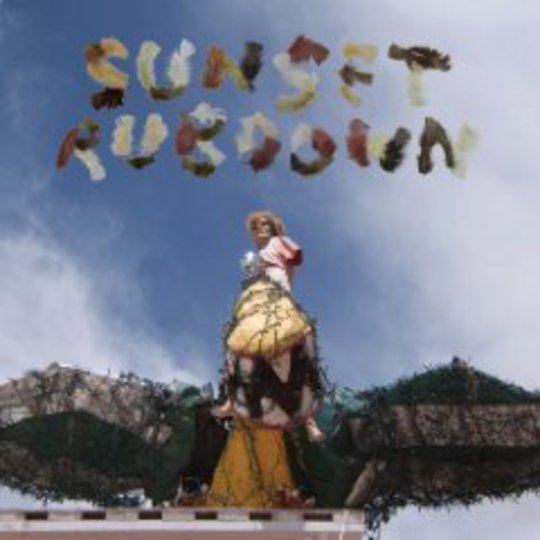 The practical, prosaic, documentarian's way to open a review of the new Sunset Rubdown album would be to note that it’s largely recorded live, and eschews the multiple overdubs of its predecessors, Shut Up, I Am Dreaming and Random Spirit Lover, all the better to reflect the stamping-flailing, wuh-huh-hooing bacchanal of the live-shows (and damn is there a lot of wuh-huh-hooing, when it comes to Sunset Rubdown.)

That seems a little disingenuous, given that Dragonslayer actually opens in medias res, in a personal mythos that could be contemporary, or could be a fantastical past, but either way feels truthful for being so bewildering. Haven’t you ever felt you’re not in Kansas anymore, that your loneliness, or maybe your new love, puts you centre-stage in an epic of your own making, with all your friends heroically ambitious, and wingfooted with youthful arrogance? That’s just the opener, 'Silver Moons', which feels like the culmination of all the doomsaying Wolf Parade and Sunset Rubdown have been setting to music over their last few albums. Spencer Krug dispatches the line "maybe those days are over, over now..." with such conviction you'd think civilization had come to an end, and we failed… but didn't it make pretty colours as it burned? As the song plays out, "...under all the folds of the dresses that you wear / there’s an ocean and a tide / a riot in the square..." is sung with such reverie that you remember 'apocalypse' just means 'unveiling' – that all this is a dance, and if it's going to end, there's something erotic in having been there… That’s just the opening.

A personal favourite for almost two years now, second track 'Idiot Heart' contains at least three of the best moments from any rock songs of recent times. No, really. They are, in order: the opening, "he walked around, like he owned the joint / just like Icarus thought he might... own the sky", giving our hero all the strut of a mythological figure; halfway through, when Spencer hollers loud enough to distort "if I were a horse, I would throw off my reins..." just before the guitar starts revving, and then the whole band charges in; near the end, when co-vocalist Camilla Wynne Ingr sings "I hope that you die… in a decent pair of shoes / you've got an awful lot of walking to do...", before Spencer joins in, yelling the same. Hey, she just cursed you to be a wandering ghost AND dissed your footwear! How bafflingly postmodern...

Spencer’s had his themes in place for a while now, which means that the biggest development may be an Eno influence coming to the fore. That’s avant-glam era Eno, by the way: songs like ‘Black Swan’ strafe the skies with guitars last heard on the peacock feathered one’s ‘Baby’s on Fire’, while ‘December Song’ chugs into being with Another Green World synths, before setting off to explore its own jungles. Plus, the one-note piano line underlying ‘Black Swan’ is prime Cale by way of Eno. Think 'I Wanna Be Your Dog' (the very definition of Rock) as well as ‘Baby’s On Fire’, though Spencer’s sardonic take on mediaeval romanticism is all his own... deviating from any sword'n'sorcery shtick the album title might imply with a natural slanginess, and decidedly un-geeky sexuality. For once, Spencer unravels his symbolism at the end of the song: "My heart is a kingdom / Where the king is a heart / My heart is king. / The king of… hearts". Meanwhile, the guitar-solos, between verses, roar about overhead like planes dodging searchlights to bomb you back to the Stone Age.

So yes, it rocks... at least as much as Krug's notional 'main' band Wolf Parade, and yet still manages to reach for even greater intricacy. Wolf Parade, you could say, are all about celebrating the world that’s fast being destroyed by corporate avarice. Sunset Rubdown are about creating worlds as a precursor to creating hope. It’s a bright new place you’ve never seen before… the bright place glimpsed in the choruses that take us back there (but only ever a few bars at a time). This is important. In theory, all popular music should do this, some or most of the time. In practice, it pushes your buttons, and leaves you feeling cheated – whacks you off, and picks your pockets at the same time. Spencer Krug creates his own (animistic) living-lyrical-world as well as, or better than, anyone who springs to mind – Joanna Newsom, Marnie Stern, Jeff Mangum (of Neutral Milk Hotel), Jason Molina, Will Oldham… whoever. Here’s just one example, of the dozens:

So, let me hammer this point home:
I see us all as lonely fires
That have burned alone
As long as we remember
But like all fireworks and all sunsets
We burn in different ways
You are a fast explosion… and I’m the embers
And though your flames are quick and mean
They will not last the year
But expire like a sudden falling star
That only nightingales have seen before
Migrating from southern jungles
And in this way, you will come find me… in December
Da-da-da!
(‘Nightingale / December Song’)

With his crooning, hollering, yelping vocals, Krug sounds as much like a great singer (Bowie / Ferry) as a non-singer (Neil Young / Brian Eno), and in any case he's a man with no shame. With Wynne Ingr’s call-and-response vocals they could be the best musical partnership since… ooh… Stuart Murdoch and Isobel Campbell…? Nick Cave and Kylie Minogue...? Sunset Rubdown makes you feel like Being a Couple is heroic. How great is that?

We’ve talked about how much this rocks, but then there’s the small matter of Spencer Krug seeming like one of the finest fucker-uppers of narrative writing lyrics in the spirit of Donald Barthelme (that’s to say: asserting the primacy of metaphor, over narrative; leaving you unsure whether you’re still in the same story, from line to line). Barthelme’s own channelling of early 20th century European surrealism (Max Ernst, André Breton, Leonora Carrington) has defined a major strand of US postmodernism since the 1960s, so this isn’t a fringe interest. If that feels too academic and fusty, let's just say "since David Berman" (the poet, as opposed to DB the Silver Jews lyricist), or Adam 'doseone' Drucker from cLOUDDEAD / Subtle. Consider the single phrase: “...on the top of the mountain / on the night of New Year's Eve / it was God, a blizzard, the dreamweaver, and me…” (from ‘Apollo, A Buffalo, And Anna Anna Anna Oh!’) Even when Spencer (inadvertently?) echoes someone similarly rainbow-minded (Tori Amos, in this case) he rains on their allusion to being surrounded by stories wherever they go (“if you need me / me and Neil’ll be / hanging out with the Dream King…”).

The only slight disappointment is ‘Paper Lace’, which appears in a slightly different form on Swan Lake's most recent album. Its first half blunders about like a kid having electric guitar lessons – literally learning how to play 'Wild Thing', being too young to have ever heard it. In the second half, Spencer deploys one of his signature vocal hooks, namely: doubling the syllables-per-bar, so a clumsy vocal melody suddenly discovers grace notes it didn’t know were there, with a tumbling urgency. Hmm… maybe it's a better song than it's pretending to be...?

By the time you get to the ten-minute closer, ‘Dragon’s Lair’, you’d hope for another ‘Kissing the Beehive’ (the tumultuous climax to At Mt Zoomer). Lacking a single strong riff to underpin the whole thing, it falls slightly short of that career high… but who else comes close? It's a fantastic lyric, making the Grand Tour of classical civilizations... and watching ancient cultures flake and fall away; you could say it's more like three older SunRub songs run together - formless at first, but sporadically cohering. Whatever all this means, Dragonslayer is an album to get your teeth into. As on the final chorus, it's: "a bigger kind of kill". You need this.