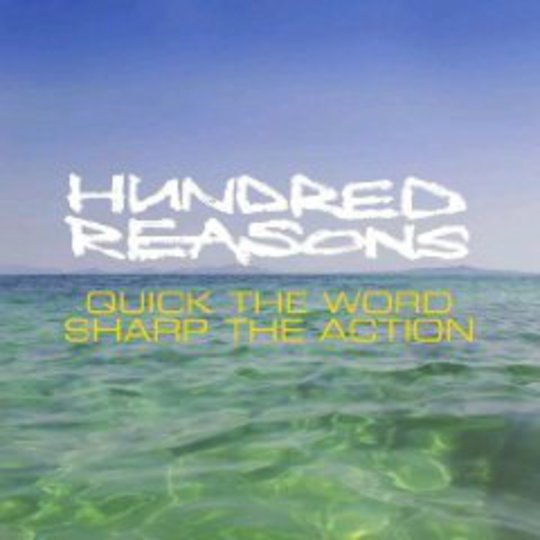 For those of us still in their teenage years in 2001, it’s pretty difficult to completely harden one’s heart against these endlessly jubilant buggers. Back then, any youth faced with a choice between po-faced bores like Haven and Longview and the mini army of pogo-happy British post-hardcore tykes… well there wasn’t much of a choice at all, was there?

Hundred Reasons didn’t spend much time worrying about scratchy sound and underground credibility; they were dishing out Astoria-ready radio anthems from pretty much the word go. Though there was never a remote possibility they’d reinvent the wheel whilst stringing together bunches of their beloved power chords, the collective success of these Surrey boys and their contemporaries felt like a vindication for the kids that voted with their feet.

As with many a youthful whim, rose-tinted glasses conceal the sneaking suspicion that all that came before may have been a rather guilty pleasure. While their breakthrough debut, Ideas Above Our Station, had its fair share of killer hooks, it’s fair to say that much of it was carried aloft on sheer exuberance and their young fans’ lust for something fresh.

If it’s difficult to imagine the band implementing major changes to their tried-and-tested formula at this stage, it’s positively bewildering just how little has penetrated the Hundred Reasons bubble over the years. Actually a re-release of their swiftly rescinded 2007 album, Quick The Word Sharp The Action finds them on very much the exact same musical turnpike as they were at the turn of the century.

Alas, although this fourth album proves that they can churn out catchy nuggets of pop/rock in their sleep, there’s nothing here to match the muscle of early hits ‘I’ll Find You’ or ‘If I Could’. What we get is competent but workmanlike songcraft, so finely tuned it ultimately sounds passionless. Colin Doran’s vocals no longer strain for notes at the edges of his range, instead they merely carry one lukewarm melody after another.

Second track, ‘No Way Back’ comes the closest to recapturing the giddiness of yore, but its impossible to ignore the fact that what’s lacking here are any rough edges, any excitement factor, anything for the listener sink their teeth into.

On Quick The Word..., Hundred Reasons sound like they’ve already achieved everything they can together in the studio. It’s a prime example of a record that sounds as if it exists purely to build a tour around. That might just fly this time, but it’s hard to imagine the band surviving for much longer on this evidence.