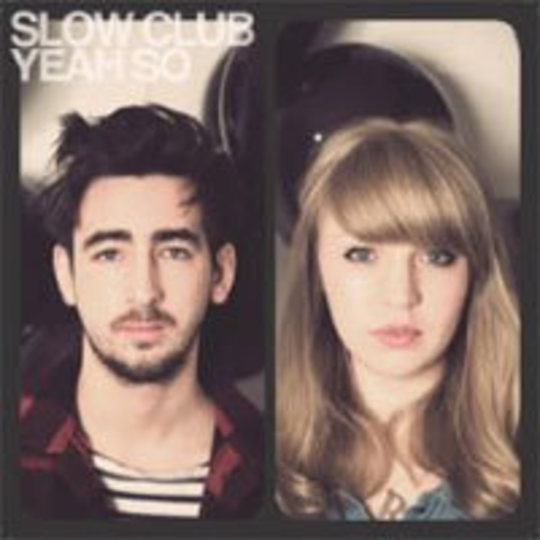 Considered too commercially upbeat by the twee86 hairslides and cardies crowd and too cutesy by those who like their primitive rock oil-stained courtesy of the local garage, its been something of a gradual pursuit for Sheffield's Slow Club to find an appropriate piece of middle ground for their happy-go-lucky blues/folk/pop montage to ease itself into.

Having released their first single over two years ago and played numerous shows at various levels of the touring and festival circuit ever since, the duo of Charles Watson and Rebecca Taylor have steadily amassed a loyal, if slightly cautious, fanbase. While their live shows have often been just as memorable for the unorthodox choices of percussion often favoured by Ms Taylor - chairs, bottles and various items of cutlery regularly crop up during a Slow Club live performance - they have also penned some hugely infectious, occasionally erratic skewed love songs that resemble an even lower-fi White Stripes getting into bed with The Pastels. Of course there are always going to be the cynics who accuse Slow Club of being little more than a gimmick, and while it has to be argued that as a two-piece - any two-piece for that matter - they'll always find themselves construed by limitations due to a lack of numbers, there's no doubt Watson and Taylor more than make up for it thanks to the quality of their songs.

This, their debut long player, seems to have taken an eternity in the making - indeed there were times when it didn't look like this album would see the light of day at all - yet Yeah So proves itself to be worth the wait. Although recorded in their hometown, parts of the record actually sound like they could have been nurtured somewhere between Nashville and Detroit, the duo's nascent Englishness giving its creators identities away, vocally at any rate.

Most of the songs on here will be instantly recognisable to anyone who's witnessed Slow Club in the flesh over the past couple of years. Early singles 'Because We're Dead' and its b-side 'Apples And Pairs' both get the re-recording treatment here which, although not significantly enhancing the original versions, still highlight their undying innocence and beauty as movingly simplistic yet delightful examples of the duo's ability to create heartwarming moments of genuine distinction. Likewise opener 'When I Go'; a whimsical skiffle whose theme centers around the theme of being married before the age of thirty yet still manages to sound effortlessly charming nonetheless. The bluesy 'It Doesn't Have To Be Beautiful' meanwhile - think Emmy The Great snuggling up to Glen Campbell circa 'Midnight Cowboy' - offers an even more diverse route into Slow Club's musical make-up, preferring blues-infused punk rhythms to maudlin sentimentality.

That's not to say that Yeah So is all about getting from start to finish in double quick time. Far from it in fact. 'I Was Unconscious, It Was A Dream' and 'Dance 'Till The Morning Light' are both bleak, and occasionally icky ballads that if anything ensure the "twee" label Slow Club find themselves adorned with will still be synonymous with their name for some time to come, while 'There Is No Good Way To Say I'm Leaving You' is possibly the most desolate composition anyone has come up with this year, its refrain implying "Its not hard to think of questions when answers are all that you want" culminating in a trail of tears, vodka and sleeping pills in no particular order.

Overall, Yeah So is a more than competent if hardly unsurprising collection that while not quite matching the energy and enthusiasm of a Slow Club live show, offers a more than palatable insight into their continuing development as potent songwriters of some regard. What Slow Club choose to do next - whether that be expand their line-up, explore their musical boundaries even further or simply concentrate on even more cutting lyrical asides - probably holds the key to their next move, but one thing's for sure, they can be proud of their achievements to date.