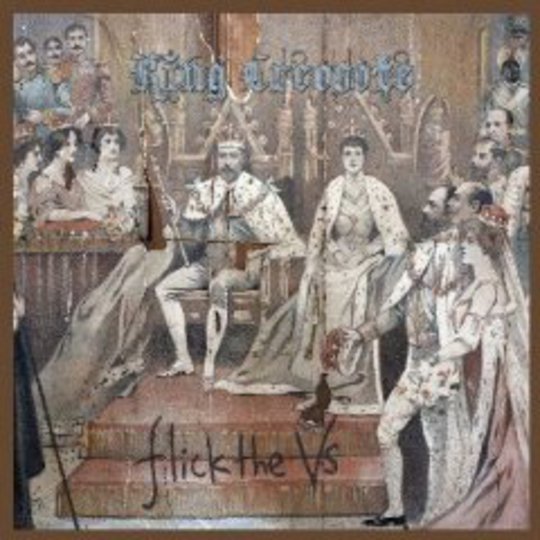 As founder of the autonomous DIY folkies The Fence Collective, King Creosote never seemed the likeliest candidate to feel the pressure of commercial expectations, but feel them he did on Warner's 679 imprint. One glossily-produced album and a notable appearance on Later... erm...later, it seemed that some degree of mainstream success could be beckoning. Alas, Kenny Anderson's deadpan lyricism is a far cry from the bland platitudes of David Gray et al, whilst few people who buy their albums from the supermarket would find much time for a record that opens with a bleak accordion ballad. Nonetheless, with Bombshell came the feeling that perhaps KC's quirky folk-pop crown had slipped somewhat. Overly-polished and with a number of rather slight and forgettable acoustic strums, it seemed a wasted opportunity for the Fence Collective's biggest potential crossover act.

Ironically it is only now that he is back to the snug independent comfort of Domino Records that he has crafted his most sublime pop song to date, in the form of Flick The Vs' lead single 'Coast On By'. Anchored (forgive the shipping pun) by an insistent Motown beat and a distorted synth heartbeat, KC flicks the vs at the wider world's demands from the comfort of his Fife home. In typically idiosyncratic fashion, Anderson states his intention to incongruously shrug off such trials even at the risk of "a mixed-up shipping metaphor". 'Coast On By' is as close as Flick The Vs has to a representative track, given the album's broad sonic spectrum, which veers between krautrock, creaky folk, jubilant bluegrass/techno hoedowns and Eighties-flecked electro pop.

The latter is the style with which KC makes his opening statement. Vaporous synth washes and vocals with a barely audible backbeat are eclipsed by a clunky drum machine beat and vocoder, which are in turn usurped by a pounding tom-and-snare beat accompanied by guitar, which doesn't sound dissimilar to a Peter Hook bassline. It's for this reason that 'No One Had It Better' is the album's longest track (it effectively has three intros), but it doesn't cloy or outstay its welcome as Anderson grounds the Hot Chip-esque retro-chic in his own warm honesty and humour. Another highlight is the pleasantly-plodding folk-pop of 'Camels Swapped For Wives' where Anderson's lamentation that "hell won't leave you alone", transforms mid-song into a beefier, bittersweet mantra. Penultimate track 'Rims' provides the aforementioned meeting of bluegrass and techno. A gloriously upbeat melody rides on a skiffle beat only to pause momentarily for a soothing accordion and a vocal harmonies chorus of "I am the worst", before taking the hoedown on a tour through techno country as Anderson laments being rejected by the "village bike". On the other hand, the crashing piano-and-strings melodrama of album closer 'Saw Circular Prowess' wouldn't sound out of place on one of the recent Morrissey albums.

Thankfully, Flick The Vs is mostly devoid of the less captivating conventional acoustic numbers which have caused previous albums to sag in the middle. 'Fell An Ox' may initially sound like somebody patiently tuning their guitar over an amplified heartbeat, but its restless, barely-there melody gives the plaintive vocal room to breath, aided beautifully by some ambient touches reminiscent of Bombshell's stronger moments. Conversely the simple acoustic waltz of 'Curtain Craft', punctuated by stabs of brass, perfectly conveys the desire to shield embarrassing emotions from prying eyes. The one weak point is perhaps 'Nothing Rings True' where the marriage of organic folk and studio trickery fails to help the song transcend its rather dull melody.

While Kenny Anderson might be reverting to old ways, flicking the vs at commercial pressures to return to the freedom of independence at "the good ship Domino", he has undoubtedly taken a musical step forward: broadening his sonic palette, sharpening his tongue (at the risk of skewering his cheek) and producing his most confident, adventurous and consistent album to date. The crown is firmly back in place and as far as King Creosote is concerned , if you don't like it then "up yours!".