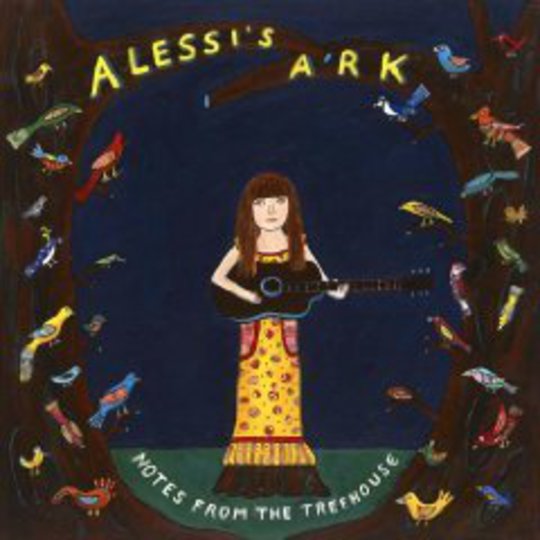 There is one important thing I need to get out of the way. And I blame this on my indolent contemporaries for having to say it, but because a solo artist is female, and it goes without saying owns a vagina, it therefore is not a requirement that they must be lumped in with this newfangled wave of solo artists who are successfully breaking through into the public consciousness and just happen to be female. All mentions of La Roux, Catherine AD, Little Boots, St. Vincent, Lily Allen, Bats for Lashes, Lady Gaga, Florence and the Machine et al shall from this moment on be tucked away in a nice little box marked XX.

So let’s wander fleet footed through the dandelions and daffodils, dip our innocent toes into idyllic ponds and journey into the world of Alessi Laurent-Marke, a willowy voiced 18-year-old from London. Only not from London the hectic Modern Metropolis, but a bygone London, the kind of London that was the muse of Blake and Wordsworth.

What powers and enchants the listener are Alessi’s distinct vocals, ‘Over The Hill’ floats head in the clouds, light acoustic strums lope under purposeful Carroll-esque adulterous storytelling. The crisp production throughout the record irons away any inconsistencies allowing Elysian Fields of breathing space.

Ok, before I twaddle away on a gust of hyperbole, the airiness does at times make you drift off, and not to a good place, but to the kind of dumb slumber that leaves a snail trail of drool hanging free from your bottom lip. For all its Narnian orchestration, 'Constellations’ don’t half make you feel tired.

Her voice, the cold confessions that echo in the empty church, wobbles over timid strings on ‘Woman’. Short and poignant. But you wonder, what exactly is Alessi telling us? It feels strange not to be privy to blunt social observation. It’s like opening up a hand-crafted mahogany jewellery box and getting hypnotized by the little plastic ballerina that spins to a multitude of question marks.

Hang on. It’s just come to me. During those vocal afflictions that get a little OTT on ‘Hummingbird’, her cords flapping like the aforementioned birds wings; Alessi reminds me of that chick that was on the X-Factor last year, the one that walked around in bare feet and absolutely murdered Coldplay’s ‘Yellow’. What was her name again? Not to come down on Alessi too much but the wistful bleating at times tips over the sides every now and then, spoiling a couple of songs. However wearisome, such instances are infrequent; the haunting moments tend to clutch and thankfully she can take you on a long, yearning countryside journey on penultimate track ‘Glendora’ without your feet getting blisters.

Notes From The Treehouse is a confident debut that strides with a certain class. Containing songs that are destined to go down well in intimate settings, as well just before the sun sets on a summer festival side stage; Alessi needs to be wary not to suffocate her audience because the pacing of the album though steady and effortless makes for a fatigued listen. But there are moments of brilliance that are most encouraging.