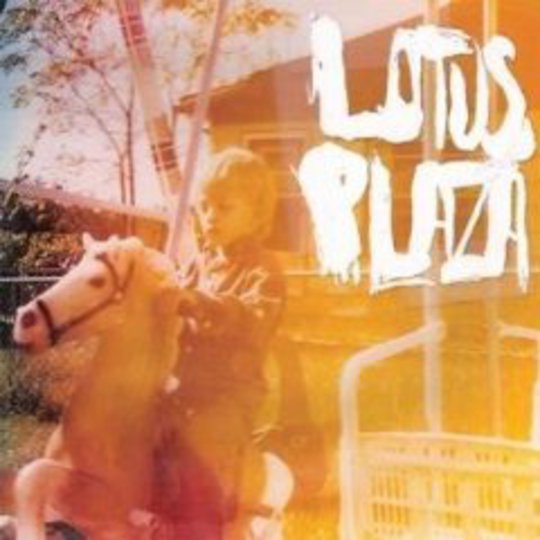 The last couple of years have seen Bradford Cox become alternative music’s pin-up boy of sorts, what with the outrageously frequent and potent recordings he’s been involved with lately. But it would seem that amid all the adulation for the prolific frontman, a vital component of his success has been all but swept under the rug. As Deerhunter‘s guitarist/miscellaneous noisemaker since just after the release of Turn it Up Faggot, Lockett Pundt has been the Robin to his Batman. The Lewis to his Morse. The Heskey to his Owen. And as the less vocal element of the band, this appears to suit him just fine.

Pundt’s importance to Deerhunter’s success has now become abundantly clear with the release of his debut solo record under the moniker of Lotus Plaza. The Floodlight Collective has been two years in the assembling and is a fascinating insight into what makes Deerhunter tick. Apparently Pundt is responsible for the band’s dreamier, ambient moods. This, offset with Bradford’s penchant for shoegazey pop, is what gives Deerhunter so much resonance.

The Floodlight Collective kicks into life with ‘Redoakway’, all off-kilter harmonising and noodling guitar. It sets the tone nicely, a clear indicator as to what to expect from the rest of the album.

Pundt’s vocals are so heavily obscured as to make them unintelligible. Their solemn tone adds to the disembodied, ghostly mood which is often apparent. The fact that the vocals are buried so deeply ends up making them oddly affecting. This is best exemplified on the ponderous ‘Whiteout’, perhaps the strongest track on the record. Lockett’s sombre voice is submerged as far as it will go, as he showcases his expertise in adding layers of sound on top, building to a decisive conclusion.

In spite of all the mournful wooziness, The Floodlight Collective isn‘t painted entirely in dark shades. It does have its occasional playful moments, such as the cheeky little guitar line on 'Quicksand' and the chiming piano on ‘Different Mirrors’. The fact that this song’s intro sounds like it’s threatening to burst into Sixties girl-pop at any moment is almost certainly down to the fact that Cox drums on the track. This is his only direct input on the record, but there are a couple of instances where it appears his predilection for warped pop may well be rubbing off on Pundt.

That said, The Floodlight Collective is at its strongest when at its most experimental. The title track is the one pitched furthest towards the ambient end of the scale. Pundt also utilises synths and electro drums sparingly but compellingly, as we see on the teasing beat of 'Sunday Night' and the almost unbearably pulsating closing minute of 'A Threaded Needle' with which the album reaches its climax.

The Floodlight Collective is an album of delicious atmosphere which sounds like it is coming from the dreams that emanate from the deepest of sleeps. Its dreamy textures go a long way towards illustrating why Deerhunter’s last couple of albums have been such rewarding listens. It’s one of the best late-night albums of the year so far, and deserves to be remembered in the best of 2009 polls. It probably won’t be, mind you, especially as Bradford Cox has time to release at least six more albums between now and then. I get the impression that won’t irk Lockett Pundt too greatly though.