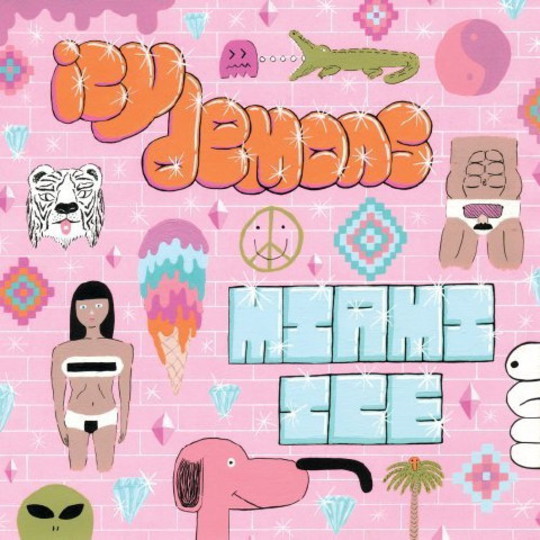 This band were not focus grouped. On some levels it might have been a good idea. “My name might be Griffin Rodriguez, but I prefer to be called Blue Hawaii, yeah?” Surely most people would rather be called Griffin? Blue Hawaii? That's an Elvis Presley musical. Whilst Griffin leads things for Icy Demons, his right hand man goes by the moniker of Pow Pow, which at least makes sense, considering a) his real name is Chris Powell, and b) he plays the drums. The names are just that little bit too 'forced student humour' for it to be funny.

It's a shame, because it is clear from the very start of album opener 'Buffalo Bill' that Icy Demons are no joke, whatever they choose to call themselves. The song brings one word to mind: Krautrock. And music doesn't get much more serious than that. Synths meander up and down whilst a plethora of percussion layers up behind it. 1970s arthouse cinema images flicker through your mind. This is cosmic (but only in a good way).

Miami Ice is nothing if not a selection box of genres. 'Miami Ice' bears a texture that wouldn't be out of place on a Klaxons album. All it needs is Simian Mobile Disco, or Metronomy, someone of that ilk, to get their remix gloves all over the dirty melodies, and Icy Demons will have a BIG HIT.

Or give them the right radio plugger and 'Summer Samba' will be over the June playlists faster than you can say “Jo Whiley pretends she discovers another indie band.” The track has vibes last heard backing adverts for the 1960s French Riviera, with Parisians sitting on terraces smoking Gauloises.

Zane Lowe might prick up his ears at 'Jantar Mantar', a track that comes in surfing the afrobeat wave like a seasoned hyperider. If this album's release hadn't been delayed in the UK by 2 years, it would be a revelation. Now we've had Foals and Blk Jks, this ethnic buggery doesn't sound so innovative. Not that that's such an issue, when the marimbas, handclaps and vocal mantra of “More the things you change, more they stay the same” layer over the spindly guitars into a spectral wonder.

This genre mix comes as no surprise once you realise/research/read the press release & find that Blue Hawaii runs a studio with visitors including Beirut, Pit Er Pat and volcano!, while Pow Pow beats the skins for vaudevillian gypsies Man Man. If you're going to mix up your genres, at least you've been schooled by kids with a degree. This also makes the band.... (that's correct small bespectacled man at the back) a side project. But Icy Demons largely avoid any disasters of the rapping Dee Dee Ramone variety.

The magpie tendencies don't always work. Old adage “jack of all trades, master of none” comes to mind on occasions. 'Centurion', placed near the end of the record, starts the landslip in quality as it all tails off. It sounds not unlike Neon Neon, bedevilled by a lack of a melody, or anything interesting happening. At other times, with tracks like the nervy 'Spywatcher' your mind falls upon “variety is the spice of life” as a better motto (if you want to live your days by one nugatory phrase).

The constant shapeshifting of the album makes it difficult to analyse, and makes the transition between tracks more difficult. Few bands can manage to move easily from sunshine pop to afrobeat. Icy Demons are not one of that select group. The edifice of Miami Ice as a cohesive whole crumbles a little as a result. However, it's only lightly damaged by its genre hopping. There are enough strong tracks here to suggest that Icy Demons don't deserve to be lumbered with the jaundiced tag of 'side project' for too long.