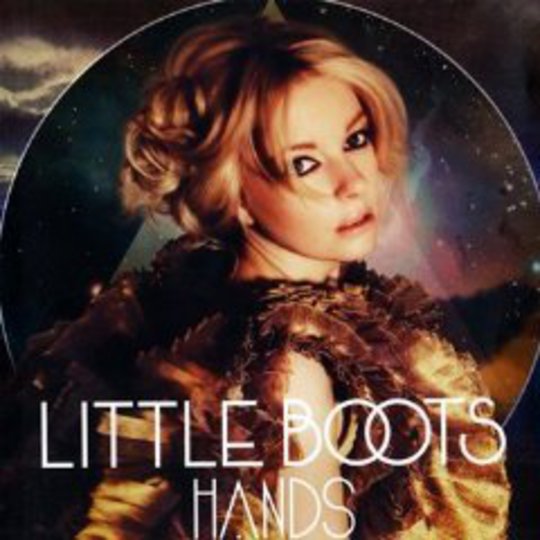 If – and it’s a hefty ‘if’ – there is any substance to the idea of 2009 playing host to a discernible trend in British female singers, it can probably most accurately be summed up like this: that the three BBC Sound Of 2009-tipped artists people are basically thinking of - Little Boots, Florence And The Machine and the actually-a-duo-not-that-anybody-cares La Roux – are all bet hedgers of the first order, dabbling a toe in the waters of indie cred, but – quite clearly – having every intent of saying “ta-ra” if and when the adult contemporary market finally caves.

That's one theory anyway, and surely better than, I dunno, them all liking sparkly clothes. Certainly there’s a degree of hostility towards all three of the above mentioned acts around these parts, some idea that their Vice/Skins/NME-friendliness is all a savvy manipulation, step 4.3 in a Machiavellian marketing strategy drawn up in a boardroom several years ago.

Certainly there’s something a little fishy about Victoria Hesketh, aka Little Boots. Having drastically overhauled her image since her days fronting Dead Disco, she’s reinvented herself as a DIY popstress of the most endearing order, ‘found’ following the popularity of some homemade YouTube vids of her bashing out covers of songs by Hot Chip, MGMT, Blur, et al, often revolving around an amusing-looking Japanese instrument called a Tenori-On. Which seems a suspiciously zeitgeisty way of 'accidentally' coming to fame as it stands; chuck in the fact Joe from Hot Chip was on board so soon to co-write ‘Stuck On Repeat’, and that a speedy search reveals a Tenori-On sets you back a distinctly un-kitchen sink sum of £919, and there’s something a bit sussed about it all.

But trust her or not, Hesketh can write a damn good pop song, and whether that’s what caused the initial buzz, it's something hard to deny when presented with the cold, hard proof of Hands.

‘Stuck On Repeat’ is her best known song, and more or less sets the tone – simple lyrical conceit revolving around dancefloor culture (”you’ve got me stuck on repeat, I can only move to the beat”), unshowy vocal, slightly dirty electronic bed that fades in and out in pulsating waves, catchy tune that isn’t rammed down your throat. Though it’s questionable how genuinely DIY it may all be, it’s in bringing a certain down-at-heel scuff to a song that could easily be horribly polished that causes ‘Stuck On Repeat’ to prevail. Hesketh’s vocals aren’t a million miles away from pre-sex kitten Kylie, i.e. pleasantly blank; but where a Kylie ‘Stuck On Repeat’ would be all shiny and dynamic, Hesketh opts for something grittier and more tangible, the synths not glistening and swooping, but maintaining a thick, low electro buzz that speaks of the heat and the darkness and the 3am confusion of small, dim, exciting dancefloors. And so we get the minor-key, pocket epic of ‘Earthquake’, the wistful sigh and thrum of its chorus charging with hangdog allure a hook that could so easily have been fine-tuned into nagging infectiousness. Same again for ‘Click’; it’s hard to imagine anybody else performing it without slipping up on its slick melody, but Hesketh’s penchant for rough – if not actively abrasive – backing and a plain, low-energy delivery reduces the sugar levels enough to allow it to work as more than an occasional track.

Perhaps that explains Hands' failings as well – ‘New In Town’ is just too perky, feeling both formulaic and calculating, its chorus combining a Radio 1-stupid hands-in-the-air sentiment - “I’m gonna take you out tonight, I’m gonna make you feel alright” with a reinforcement of her I’m-just-an–‘umble-lass-from-Blackpool credentials – ”I don’t have a lot of money but we’ll be fine, I don’t have a penny but I’ll show you a good time”. Deeper into the record, and she has nothing interesting to bring to the table vis a vis ballads - in particular ‘Tune Into My Heart’ is just awful, a seeming homage to all of Stock, Aitken & Waterman’s worst moments that sort of makes you want to find somebody with a bubble perm and punch them. But generally so long as she has a rock solid dance-pop tune she can carry off the most hackneyed of sentiments – ‘Remedy’; ‘Meddle’; ‘Ghosts’; there is barely a line in these songs that somebody hasn’t surely sung before, but the music feels fresh, her musical identity coherent.

Mostly coherent, anyway. The one exception lyrically, vocally and musically is the hidden track (probably also called ‘Hands’). A piano-only affair, Hesketh sings expressively and not a little wonkily in her Lancastrian burr, a pretty, affecting little vignette about a broken-hearted woman who mends her ills with glue and sticky tape. It’s so utterly different from everything else here that it’s a little hard to know what to make of it; certainly it does make the rest of the record look rather contrived, but then lovely as it is, it’s hard to imagine a whole album in this style being so much fun. Probably Hesketh is taking us all for a ride, but there are some good tunes along the way, and that should surely do for now.