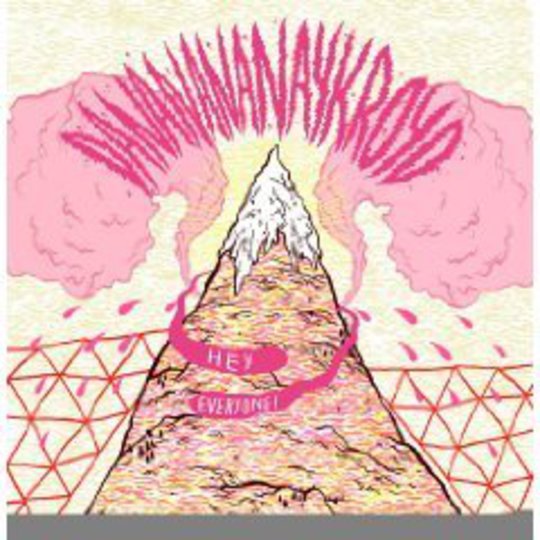 "There is something brilliant approaching" - Dananananaykroyd, 'Some Dresses'

This review is being written before its author goes to watch Dananananaykroyd tear up a venue for the third time. This is important. To scribble these words shortly after seeing the band perform would border on a professional faux pas, such is the intensity and utterly brutal magnificence of their live show. Dolling out post-gig marks would rocket the album in question into epoch-defining territory, one suspects.

So here's a more considered, pre-gig verdict on Hey Everyone!: it fucking rocks. See, the Scottish "fight-poppers" (their words, but if the cap fits, quote it...) have pulled off the unenviable task of translating the most fun, most rocking, most utterly life-affirming live show that's currently doing the rounds into a brilliant, coherent debut album.

But, of course, one of the many reason that live show is so enjoyable - aside from the party vibes - is the quality of the tunes. They've been transferred to (black?) wax in turbocharged fashion by NYC knob-twiddler Machine, the man behind the desk for Johnny Foreigner's LP, as well many other records of a heavier persuasion - notably Lamb Of God's Sacrament and Ashes Of The Wake. If you're au fait with the former's Waited Up 'Til It Was Light, you'll know what to expect from his production, namely a glossy sheen and super-peppy guitars. It suits 'em, too.

Highlights? Live favourite 'Pink Sabbath' explodes in a whirlwind of friendly noise, sort of like a hundred-mile-an-hour handshake; '1993' is four minutes of incessant (not to mention technically impressive; props to Mssrs. Robertson and Roy) guitar work, beneath which Calum Gunn yaps like a recently-assaulted puppy - we mean that as a compliment, by the way - and, here in its extended format (an abridged version appeared on the Sissy Hits EP), 'Infinity Milk' gives co-vocalist/drummer John Baillie Jnr a chance to loosen his vocal chords too - God knows what they're hollering, but it sure sounds like fun.

Stylistically, Dananananaykroyd's debut sits somewhere between two seemingly opposing genres: indie-pop and properly heavy rock. They may be a lot closer to the Johnny Foreigner end of their producer's spectrum (doh!), but there's still some serious riffage on offer here. 'The Greater Than Symbol & The Hash', for instance, could probably hold its own against something off, say, the latest Mastodon LP (though granted, Crack The Skye isn't one of their weightier efforts). How many other 'indie' bands could you say that about?

In truth, Dana... don't strictly fall into that bracket either. What does that word even mean anymore, anyway? Any band not on a major label, or acts who sound like Belle And Sebastian? Whatever it suggests to you, though, comparisons with the aforementioned Brum trio and Los Campesinos! - probably the archetypal 'indie' (oops) acts of the day - are as wide of the mark as, say, Glassjaw or At The Drive-In analogies would be. That is to say, you wouldn't be entirely missing the point, nor would you be totally getting it: Hey Everyone! manages to occupy a space all of its own - an achievement in itself.

It's a one way ticket to musical fun times (try not to smile when you hear Baillie Jnr's "Hiya!" on 'Watch This!', or the shout-along intro to 'Some Dresses'. DiS dares you), an unpretentious, hard-rocking collection that doesn't let up until its contents has burrowed into the very fabric of your existence. You don't need to have seen the band live to appreciate what's on offer here, either, and that - as those who have will know - is probably the biggest compliment we could pay it.