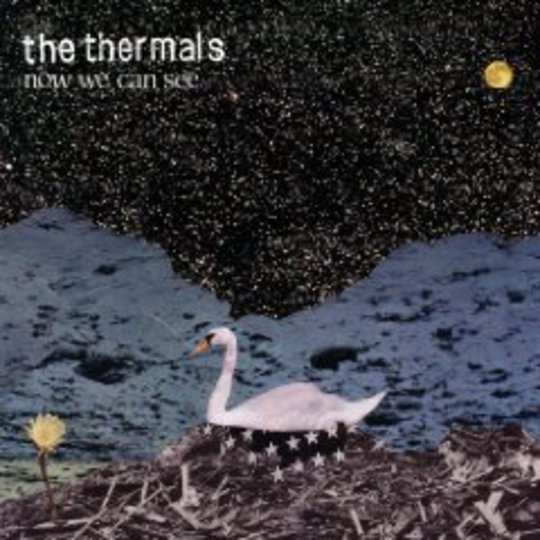 Question: if it weren’t for imminent economic catastrophe, would the world be sat on its collective hands right now with a sense of emptiness bouncing off the walls? After all, now Dubya’s gone, and with King Obama safely crowned, what else would the fractured masses have to galvanise them?

In a musical context, The Thermals find themselves in a similar situation post-previous LP The Body The Blood The Machine, which recast America as a troubled land ruled with iron fists by religious neo-con demi-fascists (at the time, not much of a re-imagination, granted). The record culminated in a nuclear apocalypse. After all that, what now for the Portland, Oregon trio?

The answer, within Now We Can See, is an overwhelming sense of learning to live again, via the conflicting medium of retrospectively looking back on life after dying, begun with strangely upbeat opener ‘When I Died’.

The title track is a celebration of sorts tipped at clarity of thinking, all “Oh-whoa-ohh-oh” refrains, tempered by barbed warnings seemingly aimed at the side effects of human progress. Admittedly, lead singer/guitarist Hutch Harris doesn’t bristle with such barely-concealed righteous anger as on The Body..., yet he’s rarely cut through The Thermals' grunge-tinted power-pop with as much confident assertion – perhaps thanks to John ‘The Paper Chase’ Congleton’s signature pristine, ballsy production work.

Once, critics cruelly opined that Harris and co made a brilliant fist of, ostensibly, recycling one song, even though that scarcely mattered when those supposedly constricting structure consistencies threw up tunes of the quality of ‘Here’s Your Future’. Even the least charitable listener would have to concede that now they’re up to two and a half, at least, however.

‘Liquid In, Liquid Out’ could, with muddy ears, slot into a set of Green Day’s volume-eschewing moments, before ‘How We Fade’ reprises the title track’s harmonies, Harris almost forlorn among “Woah-oh” interjections. It’s another highlight, directing attention toward The Thermals’ uncanny knack for conjuring downcast poptastic gems. Indeed, as their debut for Kills Rocks Stars, Now We Can See is an album fit to carry the torch in 2009 for one of the underground’s most fearlessly exciting labels.