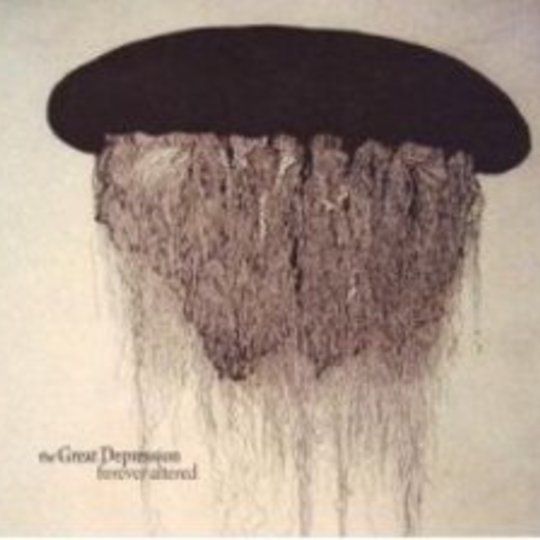 You should never judge a book by its cover. But in the musical world, where reality is skewed by hyperbolically-fed Jesus complexes, the band name's an integral part of the deal. Take Battles for example. You think they'd be everyone's favourite grey-matter pummelling math rockers if they were called The Bunnyfairies? Me neither. Fuck, they'd be lucky to broker a gig here in beer-swilling Blighty with a meadow-skipping moniker like that.

Likewise Liars, Hella, Fucked Up and The Brian Jonestown Massacre (perhaps more in spirit than in sound) are all perfect examples of modern day tune-churners whose choice of appellation epitomises their enticing aural arrangements. And kings of the ID-wearing musical miscreant? Stand forth, the UK's most effective Roland Rat impersonators, The Enemy (yeah, yeah, easy target).

With such name-tagged notions lodged firmly in mind, the prospect of The Great Depression's third LP Forever Altered doesn't exactly fill me with hopes of major-key whirring pop ditties played in the sun-blushed styling of Sweden's I'm From Barcelona. I don’t think I’ll ever understand what's so great about depression - economically or emotionally - but it's fair to say I’ve grasped the idea that any band that so openly dips its toes in the dank cauldron of despondency ain’t gonna produce a spirit-lifting collection of choons.

And sure enough, the instant a swarm of chasmal chimes and slumping drums creeps across the title track's opening notes it's clear this is going to be a suffocating affair - just perhaps not quite in the manner the Denmark-dwelling American quartet had envisaged.

See, Forever Altered’s a record best suited to the house-warming chitter-chatter of a 30-something couple who’ve transcended beyond the first notch of the property ladder. It’s music that's perfectly composed and beautifully executed but somehow floats benignly from the speakers, neither heightening states of consciousness nor submerging mindsets in the depths of despair - in other words, it’s utterly futile.

Tracks like ‘Holes In All Your Stories’ and the achingly stewed ‘A Pale Light’ are the sonic equivalent of an obedient employee whose been tapping away at the same desk for 30 years without once deviating from their comfort zone, continuing eternally on a linear trail of monotony. Yeah, every chord’s struck perfunctory, every harmony executed with a deftness of touch, and every warbling note’s scaled immaculately, yet there's no tingling nuances or jinking explorations to allow these numbers to spring out as throat-lumped show-stoppers.

With the seconds ticking drearily by, the record’s lack of stomach grows ever more intolerable; embedding itself throughout the melodramatic opus of ‘Stolen’, into ‘Throw Me Ropes’’ weeping chromosome of string-swept whispers before mercifully resting by the padded wall finale of ‘Colliding (into what might been)’ for a bluster of soaring key-speckled reflection.

Ultimately, such a shimmering climax is what grates most about Forever Altered. This could have been a collection of wondrous, tear-duct seeping soundscapes, but all that’s evolved is a record so stagnant it would spawn a million malaria-spreading mosquitoes were it to be liquidised. Sure, The Great Depression may appeal to the more mournful of heart, but what lies beneath Forever Altered’s cover is a set of tatty pages with very little content.