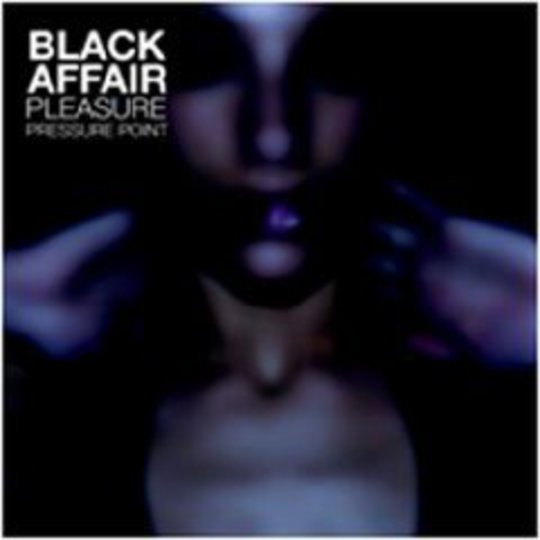 Steve Mason has never been one to rest on his laurels, or it seems, rest. The disbandment of The Beta Band saw him re-emerge as the fiercely political, meandering hip hop troubadour, King Biscuit Time, release the superb debut, Black Gold, only to, perplexingly, call time on the KBT moniker. You’d think he’d retreat, take a sabbatical, and lick his wounds, but for a man who seems to operate in a jerking cycle of creativity and depression, it comes as little surprise that his sunny disposition has finally been eclipsed.

Black Affair is the dark side of the Mason moon, one of mordant ‘80s electro, soulless metronomy and dark industrialism. It also seems KBT’s demise was a calculated one, signalling a deliberate change in direction, marking the moment Mason decided to elaborate on dormant ‘80s influences. Not that he’s elaborated too much. Pleasure Pressure Point is stark in its make up and eschews the classic, languid fluency he made his staple in The Beta Band. It veers towards the sinister soundscaping of Depeche Mode and the synth-addled tendencies of The Human League with Mason’s monotone vocal continuing to shed any emotional attachment to the music.

He seems almost pre-programmed, gawping snapshots of lines or trapping himself in repetitive lyric loops. If his Beta Band days represent British public transport, Black Affair is its clinical European cousin, efficiently adhering to a strict backbone of rasping snare and chilling, minimal electro. It’s difficult to breakdown Pleasure Pressure Point’s distant veneer: ‘It Goes Like This’ is all about crisp percussive claps and Mason’s standoffish vocal, _‘Japanese Happening’ _plods on with bleak resignation, while _‘You and Me’ _fleetingly raises the tempo, snapping with metronomic beats and thunder claps.

Okay, so it’s a bold change in direction, and while that’s laudable, there’s very little differentiation, which makes for a frustrating, often banal long-player. It’s easily four songs too long - the filler of ‘Reel to Reel’ and ‘Subfuge’ sound like Crystal Castles cast offs, and the Acid Casuals-lite of ‘Will She Come’ and the monotonous repetition of ‘It’s Real’ should have been consigned to a studio acid bath.

Equally frustrating is that Pleasure Pressure Point has a sting in its tail, a reward for sticking with the robotic melancholy. ‘Mute Me’ _struggles from under the album’s blanket of downbeat hypnotism and lurches into a ragged life of break beat overload and spatial short circuitry before ‘Pills’ _wanders off into an abyss of left field electronica and doesn’t return.

Let’s hope _he_ does. Let’s hope there’s light at the end of the tunnel after all, that he hasn’t been entirely inhibited by the spirit of Johnny 5, and that Black Affair is just another phase in the complex Mason psyche. Fingers crossed, eh?