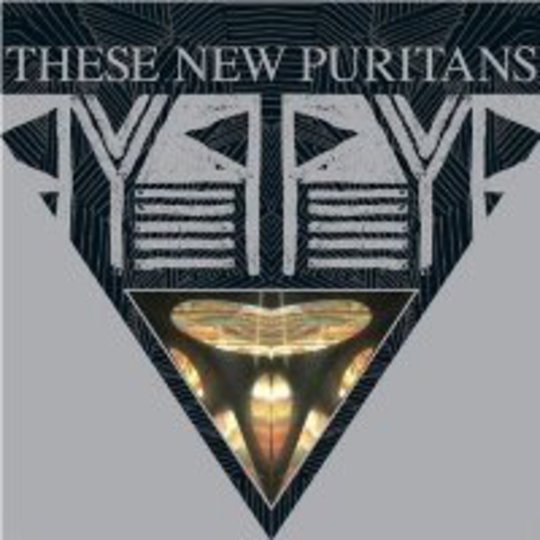 Withdrawn from reality, Beat Pyramid’s attention has drifted from numerological divination to alchemical pursuits within its opening five minutes; theoretical furrows that make Scritti Politti’s fusing of hegemonic contemplations into darling three-minute ditties suddenly seem formulaic. Talking in tongues, princes of pretension These New Puritans are a baffling proposition, blanketed by a layer of frustrating puns and paradoxes running amok.

Shifting through guises, Beat Pyramid’s surreal qualities are discomfortingly dreamlike, tape loops lapping as the record circles in on itself with ‘..ce I Will Say This Twice’ and ‘I Will Say This Twi…’ acting as bookending passages. Recurring verses rear up repeatedly, with the same raw hooks fed back through the same gut until they sit contentedly digested.

With hypnotic instrumentals as indebted to cLOUDDEAD’s esoteric hip-hop soundscapes as they are Brooklyn beatniks Gang Gang Dance’s broken beats, and skewed philosophical musings as close to Wu Tang’s Shaolin ramblings as Klaxons’ post-graduate hyper-realities, all is brilliantly bent out of fashion, its scope deliriously set adrift. John Dee entangled with Jay Dee. At the centre of events is deranged young gentleman and self-proclaimed ‘director’ Jack Barnett, whose solipsistic bawl resembles the brattish bark of a juvenile Mark E Smith, leaking out demented declarations like the lecherous calls that “she’s into numerology, she’s into astrology, she’s into phenomenology” amid ‘En Papier’’s cacophonous choruses. It’s as banal as it is brilliant.

Trouble is, for all the reckless ingenuity, Beat Pyramid seems a somewhat calculated chaos, closing out the brutish resonance of 2006’s unhinged Now Pluvial EP. In many senses TNPS are reminiscent of the clinical butterfly collection of influences that Radiohead have eternally showcased, leaving the music struggling for an identity of its own and cloaking any clear-cut character as a record of reference points.

This is perfectly detailed in the record’s most introspective moment, ‘MKK3’, an alleged piecing-together of excerpts from adolescent love poems posted on the internet. Far from as plaintive as it initially seems, Barnett at one point bemoaning that he’s “far out of happiness”, the exclamation that Michael Barrymore’s jerking off in the suburbs of Milton Keynes underlines that the po-faces are part of the façade. It’s a stark lyrical folly that underlines the snide humour and absurdism employed, and an example of their collage-like approach, even if the track itself resembles a lumbering pastiche of The Rakes’ Pink Flag punk.

But as an outfit named after a track from The Real New Fall LP, Smith remains the most appropriate reference point. ‘Elvis’ chaotically recalls ‘Theme For Sparta FC’, with Barnett delivering an endless list of inane hooks. Elsewhere, ‘Navigate’ – previously a stark 16-minute behemoth – is warped and morphed into a reprise of ‘Colours’. Towards the close, bits of every track seem to bleed into each other, held together by George Barnett’s totemic drum beat. Forget the krautrock and dubstep references, hollow-hearted tearjerker ‘Costume’ is as closely connected to the Watership Down soundtrack as anything else, as ‘Doppelganger’ feeds back in and a recurring nightmare burrows back into the brain.

Pent-up princes, Beat Pyramid suffers occasional uncomfortable lapses where the impenetrable slew of riddles leave the record struggling to seem much more than the deranged shrieking of more myths of the near future as it flickers from the ridiculous (‘Infinity Ytinifni’, ‘£4’) to the remarkable (‘Swords of Truth’, ‘Navigate-Colours’). But, cut adrift with its own bewildering reference points, peppered with glimpses of cryptic brilliance and slabs of deceptive nonsense, Beat Pyramid is a flawed patchwork masterpiece.