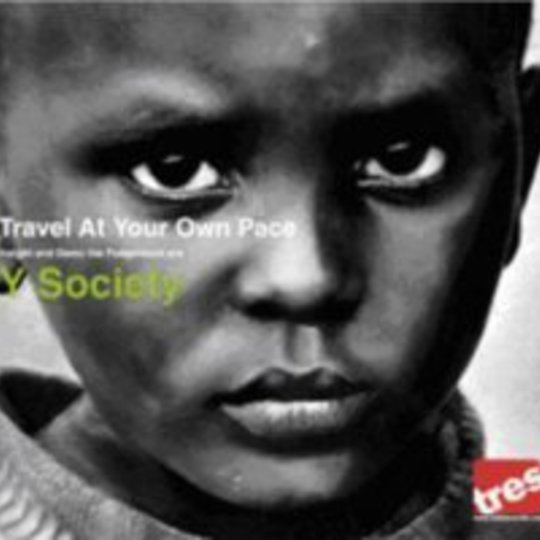 When listening to and thinking about music, the concept of ‘flow’ holds a great deal of importance with myself. I often find that my favourite records may not be the ones with the best songs, or even by the best bands or artists, but the ones that have a certain flow throughout the entirety of the record. This concept is hard to define, but I’m sure anybody reading this knows how flow feels; an album has flow when you can sit on a bus and listen to it over and over again and it doesn’t get boring, or conversely, you could put that same album on in the background at home and say, write a dissertation, and it won’t distract you – just keep you moving with it. Flow occurs on an album when the songs appear to effortlessly stream into one another, never breaking a constant invisible infrastructure that keeps the album intact. That, to me, makes an album perfect.

Y Society’s LP, Travel At Your Own Pace has got flow. This is especially noteworthy considering the fact that it is a debut effort from a group (consisting of MC Insight and DJ Damu the Fudgemunk) who, despite each gaining a devoted following for their past efforts in the American underground rap scene, and having participated in many various projects with distinguished artists (including Mr. Lif and KRS-One), have never truly had the opportunity to be widely appreciated for their own individual talents and actual song writing craft. Hopefully Travel At Your Own Pace will change that, gaining them the more commercial praise that they merit as separate artists and as a unit.

But what (or who) do Y Society actually sound like? This is a difficult question to answer. In many ways, their approach to hip-hop is not altogether different from the stylings of various more celebrated ‘backpack’ rap bands – i.e. Jurassic 5, Ugly Duckling, Tribe Called Quest, etc – but there is also something else going on here. Y Society very uniquely blend the sound of the old school with that of the new school, without being overly conscious of their efforts. Listening to Travel At Your Own Pace, it’s quite clear that this music comes as a result of both musicians’ years of involvement and experience within the underground scene, as well as the records they own; you can hear their influences, without their songs sloppily becoming tributes over original compositions. Each song on their album exhibits exceptional musical variety; from opening nostalgia-inducing summer jam ‘This Is An Introduction’, all the way through to the speed-funk, soulful ‘At My Own Pace’, each beat on this album feels exclusive, each verse equally meaningful and passionate.

This is hip-hop for hip-hop lovers, but also arguably an album which should be used to convince the stubborn to dig a little deeper for ‘good’ hip-hop – which thankfully Y Society remind us does exist.