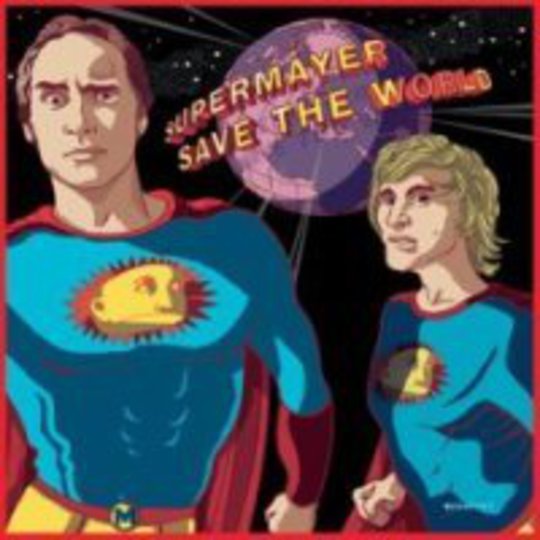 Supermayer are vintage. I don’t mean ‘vintage’ in the more fashionable, now sense of the word – which brings to mind a certain retro-fashion-chic, and musically implies a presently dominant electro sound full of squelchy, pulsating synthesizers, crunchy 8-Bit beats and usually a cowbell or two. No, no_ – Supermayer have the balls to go against this current trend in popular electronic music, releasing an album which is so vintage in its sounds that it becomes _un-‘vintage’ in its marketability. Save The World, debut LP and product of underground icons Superpitcher and Michael Mayer’s alliance, is largely a dance album for people who like dance music, not a dance album for people who like Bring Me The Horizon. Sure, the cowbells are there, accentuating the hip-jerkin’, thigh-slappin’, ass-bumpin’ bass groove of ‘The Art of Letting Go’, the opening track of the album – but as a listener, I get the impression that Supermayer aren’t trying to be kitsch, ironic, or cute with that cowbell (like many of their contemporaries). Rather, they are attempting to help people work up the courage to get to the dance floor and - let’s face it - end up dancing like a prick.

That being said, however, this is not an archetypal dance record either, and it is beneath the surface of Save The World’s beat heavy exterior that one recognises the core layer of more complex, bizarre, and often heavily discordant sounds. Take for example ‘Us and Them’, a slow building electronic anthem that to me sounds exactly like an updated version of the original soundtrack to Mathew Broderick’s 1983 nerd-friendly flick WarGames. The song begins with a twinkly, arpeggiated synth line, but eventually descends into an irregular and multifarious cacophony of screechy robot sounds, buzzing bass tweaks and (wait for it) saxophones. A brass section? On a dance record? You betcha’. It’s not that this is the most original of ideas, it’s just that Supermayer are deploying these sounds with what can only be described as more ease and confidence then you might find on anything by someone like Minotaur Shock.

Supermayer only persist in genre hopping further as the record develops, fusing more folk elements into their sound. This is predominantly marked on ‘The Lonesome King’, which treats itself more as a campfire friendly sing-along then anything else. Here, Supermayer commit the classic error of branching out stylistically in a way that is detrimental to the rest of their record; the fusion of their old school, trans-Berlin electro with folk melodies feels somewhat tiresome and unoriginal on an album so sonically ambidextrous. Luckily, Supermayer abandon this sound for the rest of Save the World, and allow the more folk inclinations of their songs to seep into the remaining tracks in a more subtle and professional manner.

Supermayer aren’t groundbreaking. But they’re good. They’ve put time into this record, and have cleverly put this on display throughout Save the World’s many tiny details. Unfortunately, these details will most likely be lost on the more casual listener, and therefore not allow Supermayer to gain the recognition they probably deserve.