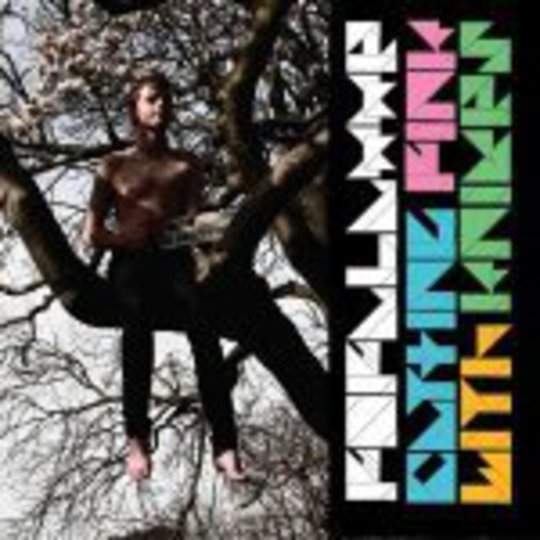 Pity the poor weekend kid whose final job at insert reputable record store here before a return to a five-day slog of sixth form nonsense is to rack this album, the second inverted-commas long-player from London-based synapse-butchers Cutting Pink With Knives. Rock/pop? Fair enough, yet Populuxxe is neither and both. And stupid-electro-core. And drum-and-bass-in-space. And camp-pop-jazz. And jizz-splatter-keyz. And screamo-jerk-filth. And something in-between that man’s had no need ‘til now to coin a pigeonhole for.

Although running to 16 tracks, this is an album that really doesn’t outstay its welcome at a brief 25 minutes long – seizure-inducing bursts of bombast, replete with vocals straight out of a slasher flick played at double speed, buzz past the listener with such frightening ferocity (sub that for ‘velocity’ and it still rings true) that each break – a little synth boogie here, some super-cheesy ‘80s hair-metal geetar licks there – is an oasis in a desert swarming with gun-toting hostiles. An album for those short of attention span this most certainly is – weekend record store kids will have had fag-break wanks that lasted longer than Populuxxe.

Compositionally, CPWK have progressed quite noticeably from their fun but one-dimensional debut, Oh Wow!; whereas that offered a series of sound-alike blasts of ADHD electro-infected screamo, here the band breaks from the aggressive stereotype to deliver a healthy does of fun into proceedings. The increased presence of high-in-the-mix keys – set within the frantic beat structure of pieces that jerk like convulsive Smurfs – adds an air of Blood Brothers to an already potent mix; as a result, CPWK’s potential audience quadruples in an instant. This is music you can dance to in the most over-the-top manner possible (read: get electric-boogaloo) and fuck some dude’s face up to. If he puts a foot out of line, that is – CPWK don’t go for that King of the Pit shit, at least not without a knowing smile.

‘Pryamids’ offers the initiated a suggestion of CPWK’s less-explored abilities, beginning with some sweet solo piano before turning into Big Business shorn of their sensory-overload amplification. ‘All Our Oldest Spirits And Ghosts’ twists the demo-function stylings of that electro band featured in The Mighty Boosh that time (aka Robots in Disguise) into a celebratory riot of colour and contortions. ‘Airz’ rides in on a synth line so perfectly ‘80s that it’d come as no surprise if CPWK didn’t half-inch it from the Flight Of The Navigator OST. The result of such variety: a surprisingly rewarding album that finds its makers firing on as many creative cylinders as possible for an instrument-restricted trio. Nobody is making music like this in the UK right now except CPWK. Question is, of course: would anyone else want to?

Live, CPWK have been experimenting with live drumming for certain songs (as witnessed at their recent Holy Roar vs DiS show at RoTa), and Populuxxe exhibits space enough to incorporate such organic percussion without stripping away the computerised jackhammer beats that remain the band’s most obvious and appealing characteristic. Perhaps that’s something for chapter three, we’ll see. What’s on offer now, though, is as perfectly bipolar and chaotically mischievous as anyone with prior knowledge of the band could have hoped for.

Just expect to have to flick through entirely inappropriate album ordering to find it out on the high street.