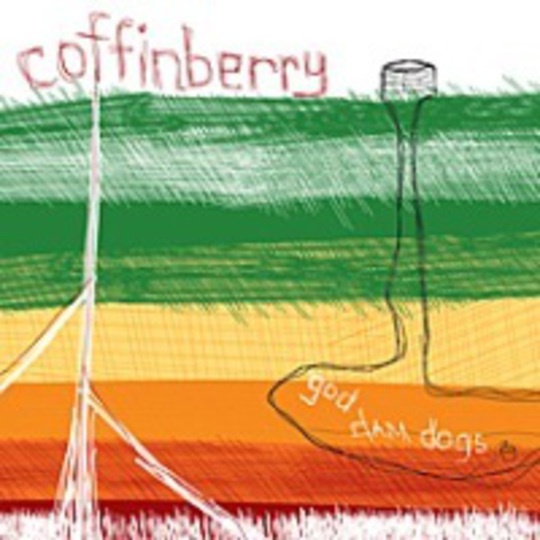 There was a period in the American music scene of the ‘90s where they used to call this stuff ‘college rock’. At its best, you’d find the likes of The Lemonheads, The Pixes, Dinosaur Junior and Sebadoh crafting, if not legendary albums, at least songs and records that are still fondly remembered by many to this day.

With their debut, God Damn Dogs, Cleveland Ohio’s Coffinberry take many elements from the above bands and marry them with the equally loved sounds of The Replacements and Husker Du’s poppier moments. Which, if you’ve been doing the musical maths by counting up this list of influences and carrying the two over into the ‘00s, you’ve just realised that this probably sounds a bit like the same type of indie-infused American bar rock that’s earned The Hold Steady their fair share of praise (and derision) from music rags on both sides of Atlantic.

Yet where the Hold Steady draw attention to themselves through singer Craig Finn’s lyrical gifts and hard-to-forget singing style, Coffinberry are content with letting the groove ride in a more level-headed traditional manner that occasionally brings to mind the blue-collar rock of Springsteen.

Filled with songs that rarely exceed the three-minute mark, God Damn Dogs is at its best with the acoustic juxtaposition and gruff pop chorus of ‘Earthworm in the Sun’. The fuzzed-out opening of ‘Bombs and Palm Trees’ finds the band dabbling for a flash of an instance in the kind of angular art rock perfected by fellow Ohio dwellers Pere Ubu before quickly reverting to a tried and tested rock routine. Elsewhere, the slow murmur of closer ‘Temperteam’ showcases a moody, lamenting atmosphere that is, unfortunately, sorely lacking from the rest of the record.

There aren’t enough highs here to make Coffinberry’s stab at well-worn American rock ‘n’ roll memorable. God Damn Dogs suffers from an over abundance of songs repeating the same formula of gruff voice, grungy guitars and the occasional piano part over and over again. And lacking the presence of a Craig Finn or The Replacement’s Paul Westerberg to pull together the band’s obvious approach, the majority of these songs are far too stuck in an alt. rock mid-‘90s gutter for their own good.

Still, it’s also rather unassuming. God Damn Dogs may not do much to inspire, but if you walked into the right bar in the right American town, it would fit nicely in the background while you knocked back a few bottles of Bud and watched the ball game.