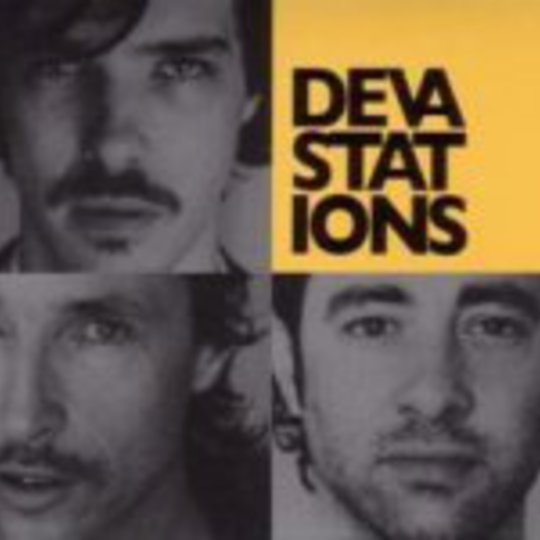 I’m yet to visit Berlin, but there’s something about how I imagine it to be – cold edges, narrow alleys, suffocating basements – that’s conveyed in the feel of Yes, U, Devastations’ follow-up to last year’s impressive Coal (reviewed here. Berlin is a city that’s changed, greatly, in the last century; as such, memories are trapped in brick and mortar, buried by progress but able to resonate through steel and glass; modernity but a filter for the perception of a past never truly laid to rest. _Yes, U is an album of sparseness and dynamic subtlety, informed by aches and pains but executed with steady minds, consciences clean. It is all cold edges, narrow alleys and suffocating basements; oppressive and, simultaneously, progressive; the spaces between the sounds accentuating the shrieks that pepper these ten tracks.

Forgive the obtuse introduction, but Devastations are a necessarily awkward group; although they are a three-piece at their core – additional musicians brought in for fleshing-out purposes but forever satellites around a solid body – with a typical guitar-and-drums-and-bass set-up, there’s magic and mystery here, intrigue and enticement, that’s rarely evident in works of such stripped-back elegance. Songs don’t explode into life; rather, they click and pulse, twitch and cough. Few remain still for long, but when they do – like ‘The Pest’ – the repetition is welcomed, the song drawing you in, deeper and deeper, ‘til the black’s all around and the exit’s but a pinprick against an expanse incalculable. Minimalism doesn’t rule throughout, of course; ‘Rosa’ buoys on ripples of fuzzing feedback, true drama infecting lead vocalist Conrad Standish’s voice ‘til Hugo Cran’s precision percussion kicks the ante up several notches. It swirls and swells, squealing the whole way, like Dinosaur Jr covering The Black Heart Procession.

These Europe-based Australians – Yes, U was recorded in Berlin, hence that opening – know how to charm the listener, as well as shit them out with walls of steely instrumentation. Collaborator Nigel Yang’s piano touches on ‘An Avalanche Of Stars’ might lean heavily on a certain John Barry arrangement, but they’re no less beautiful for the easily drawn parallel. Arriving towards the record’s end, the song represents its parent LP’s underbelly – soft and warm, sweetness briefly forcing shade to the shadows where it belongs. “Darling, let’s go out tonight”: even lyrically the song’s a left turn, escapism weighing heavy with the asphyxiating elements of its tracklisting predecessors lifted for five minutes. Grief forgotten, whatever the cost.

Misery and regret, though, are muses that many a man can call upon for inspiration, and Standish and co-vocalist Tom Carlyon have their share of demons infecting their blood; bile and spit, it’s here on tape, captured catharsis rendered as exquisitely as a band like Shipping News or Enablers. Some will find the mood conjured by such morose offerings as ‘The Saddest Sound’ and the lustfully lamenting ‘Oh Me, Oh My’ initially difficult to penetrate, but delve as deep as Devastations allow and their hearts are as large as yours or mine. Their highly calculated, absolutely minimalist approach to articulating their innermost might comprise an obstacle at first, but it’s one that’s not only overcome but ultimately received as a superlative plus point – no other band is currently making music of such emotional richness while playing in such a peculiarly teutonic fashion, pieces clipped of their unnecessary embellishments, fussy frills deemed expendable.

Berlin might now be inviting where once it was the last place tourists would care to visit, but there’s something alien about Devastations that both attracts and repels; like the city it was conceived in – or, at least, committed to the form we now find it in – Yes, U is characterised by architecture of a very organic nature, structures that stand upon foundations forgotten, nature finding its way through man’s hand on blueprints to mask the past. Dig a little, though, and relics are here for the finding; nothing tangible, just feelings universal that so many choose to neglect, favouring the eternal march over reflection. Look into Yes, U for long enough and expect its makers’ informant angels and devils to mirror your own quite remarkably.