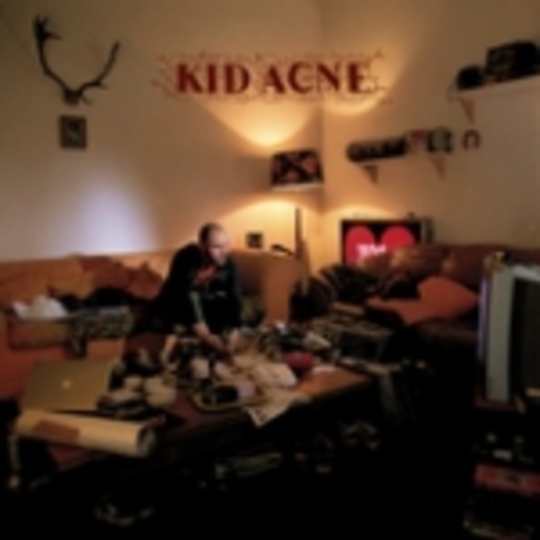 Any minute now, a dormant disease of staggering hence-unreported scale could burst forth throughout hip-hop. Much like television viewers and moviegoers have become desensitized to violence, rap fans will soon no longer register tough guy posturing or any sort of seriousness at all. Come 2009, every XXL and The Source writer will suddenly only be able to listen to funny hip-hop. And Kid Acne will clean up.

Conveniently, the East Mids/West Yorks emcee is on the comedic form of his life with this preview of returning LP Romance Ain’t Dead, imaginative grinding production bringing respectability to his insanely silly chat.

The title track details a grim-sounding Friday night in, flipping “ruddy” like the finest swear word never used, threatening to fill time by jerking off and then breaking into an exultant pay-off line of “I got two phones like a drug dealer”. Sadly, that just means double trouble; the Kid admits “I must confess/When I’ve had a sup I’m a right text pest”.

More laugh-inducing still is ‘Split Heads’, which warrants its opening gambit being quoted in full for sheer only-in-England appeal: “Girls with bubble perms are ugly / Guys with sovereigns are druggies / Get mugged with a knife that’s rusty / When you live six miles to Rugby / Trust me / The women are muscley / Got tattoos where they probably shouldn’t be”. It’s followed by a shab-diddly-abulous piss-takingly catchy chorus courtesy of one of the country’s most underrated surreal rhyme-smiths, Infinite Livez, then you running out the house to make a swift purchase. Ruddy good work.