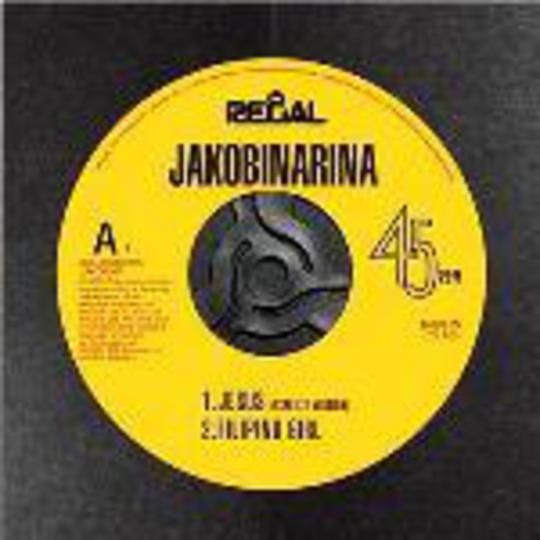 Icelandic teens with potty mouths Jakobinarina’s second single – a limited-edition vinyl release – is a wickedly enjoyable, Mates Of State meets Maximo Park in a Hafnarfjoedur back alley with broken bottles and crowbars in their palms, romp, pure and simple. If ‘Jesus’ wasn’t so peppered with naughty words it’d be a shoe-in for a top ten spot in some parallel dimension’s cooler-than-thou singles chart; y’know, where the highest new entries are the best new entries. What’s that you say? Single edit version? Oh, you spoil sports.

Worry not, though, fans of turned-blue air and rough-edged, fuzzed and fucked production values: flipside ‘Filipino Girl’ is as wonderfully pop as its companion track, albeit with those keyboard licks replaced by Rocket From The Crypt guitars pulling surf moves at a drive-in cinema in the late ‘50s – it’s all first wave of teenage cool cool, bouncing and buzzing and as toe-tappingly ace as anything Timbaland’s lent a beat or two to this year. “I say rock you say roll… c’mon baby, feel my soul”… the simplest things in life, often, are the most refreshingly awesome.