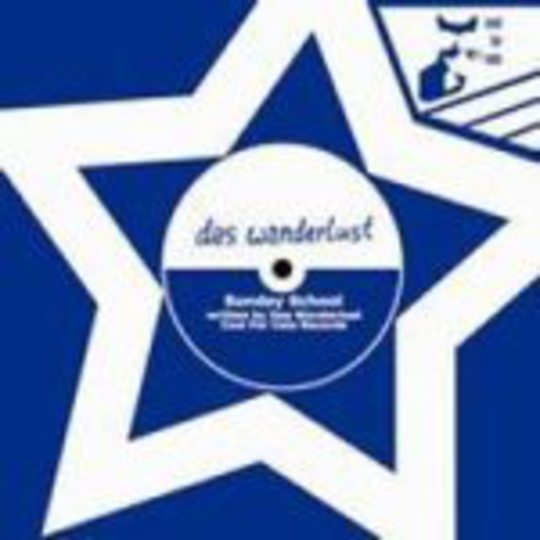 Released through the recently established sister label of Fierce Panda, Cool For Cats (what’s their deal with animals, really?), ‘Sunday School’ is the second single from Middlesborough-based skewed-indie-pop pair (plus mates) Das Wanderlust. With BBC support already secured – the band represented Radio 1 at this year’s Eurosonic event, and Marc Riley is a fan – all on-paper pointers seem to direct the first-timer the way of a positive appraisal. And then you play it. And. Oh. Dear.

Or, if your fantasy band is some mushed and slushed amalgamation of Art Brut and Bis, brilliant. Of course, if your imagination flies in such a wayward direction you should seek advice immediately, or at least randomly buy a record from the Warp stable just to introduce some stability into your disc-spinning preferences (and to remind yourself that it really isn’t 1998 anymore, and Melody Maker died years ago… it’s the only place something like this would have been looked upon favourably… I mean, they did like King Adora). To pull together a couple of positives: ‘Sunday School’ features some jaunty enough keyboard work – the sort that would make a pissed-up self-confessed geek-core student dance alone at his or her S.U.’s once-fortnightly indie club when every other sensible fucker – that’s 13 of the 14 that showed up – has left to watch the Learning Zone – and does seesaw from quiet and sensible to OMG off-da-hoooook mental like a St George-and-bulldog-tattooed skinhead schizophrenic placing bets on the Premiership title race in October. It is a bit all over the place is what we’re saying here, basically.

Hang on: that makes it sound rubbish, doesn’t it? Yes, yes it does. A pair of b-sides complete the package, neither improving it – ‘Humbug’, the best of the three songs, at least has some chunky geetaar crunches to complement its irritating keys and SHUTTHEFUCKUP grating vocals, while ‘Supermarkets vs Greengrocers’ is melodically vacant and absolutely humour free despite its obvious tongue-in-cheek intentions: oooh this tastes good but oooh this is so cheap, et cetera.

In short, Das Wanderlust’s second single is horseshit, tipped into your ears and forced deep into their canals with cotton buds, bumping against your brain and stinking your whole face up. No amount of schooling, on a Sunday or every fucking day, could make this band worth your time and money. Wash out your ears and watch them drown down the plughole, never to bother you with their nonsense again.