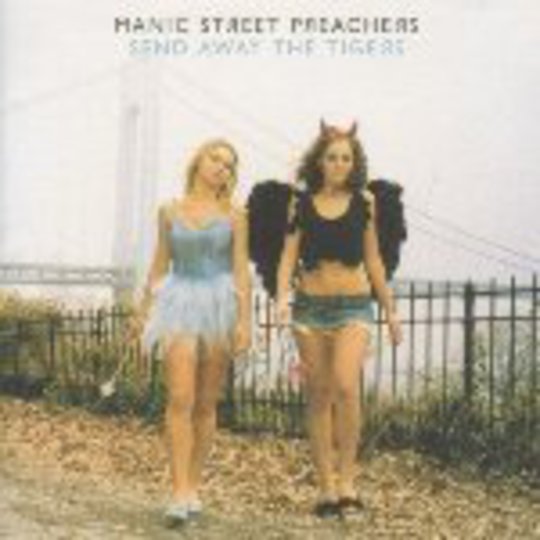 Critics used to wonder if Manic Street Preachers’ defiantly rockist sound was a match for their revolutionary content. Now you just sort of hope they’ll piss off quietly.

The band’s inability to move beyond a few staid reference points – squalling post-punk of The Holy Bible excepted – was both their biggest asset and their biggest flaw, spawning a clutch of gloomy rock anthems worth doffing your cap to, but effectively rendering them a spent creative force after the grand emotional catharsis of their post-Richey opus Everything Must Go.

Send Away The Tigers has been billed as their return to form, and that’s true in one sense, if by ‘form’ you mean the bombastic AOR punk perfected on EMG and gone horribly awry on This Is My Truth Tell Me Yours.

The title track’s dry vocal production and melody recall John Lennon’s ‘Instant Karma’, albeit with thwacking great Slash-esque guitar fills and slightly naff, air-punching chorus bolted shamelessly on. The irony won’t be lost on those who remember the band’s previous incarnation as Lennon-baiting iconoclasts, and by the time the hidden bonus track reveals itself to be none other than a cover of the selfsame scouse legend’s ‘Working Class Hero’, you’ll be shaking your head in disbelief.

‘Underdogs' is embarrassing, conjuring as it does some pot-bellied fifty-quid bloke all caked in mascara and prancing around in a leopard skin tutu, frightening the kids. ‘Winterlovers’ even has the barefaced cheek to do Queen impersonations with an apparently straight face – cheers, guys.

Everyone seems to be going through the motions here, whether it's Sean Moore drumming like he'd rather be filling in his tax return forms, Dave Eringa’s tacky, synthetic orchestral arrangements or James Dean Bradfield’s interminable guitar widdling. As he limbers up for his umpteenth solo with all the conviction of a man taking his dog for a walk, you can only hope Send Away The Tigers is the bloated swansong from a band that should have called it quits three albums ago.