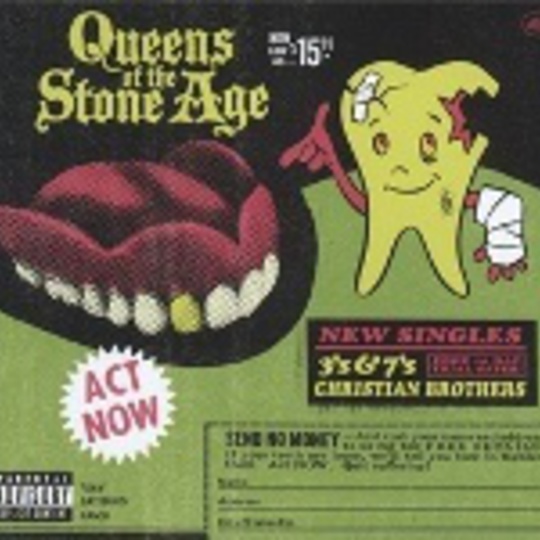 Excellent: a song that starts and ends like prime Nirvana – you know, when their rock locks were offset by their pop socks – with a middle that wriggles and squeals like a piglet slowly squished by some sort of pneumatic device – think Terminator, right, meets Babe: Pig In The City. Neat.

The first ‘proper’ single to be lifted from Era Vulgaris – which has currently split office opinion in twain, cleanly and neatly – ‘3’s & 7’s’ lacks the bite of its download-only counterpart ‘Sick Sick Sick’ (watch it here), but still chugs and chops along on some fairly atypical riff work – it’s a song that’s immediately recognisable as the work of Queens Of The Stone Age, but it’s soaked in enough fizzy pop to ensure that mainstream radio doesn’t run screaming from it. Core Queen Josh Homme purrs throughout, his soft-but-firm drawl lending a relaxed tone to an occasionally rampant backdrop of fuzzy guitars and precision beats. Acoustic b-side ‘Christian Brothers’ – seems Homme’s been having the odd séance with the ghost of one Elliott Smith – serves only to heighten the highs of it’s a-side companion piece.

When all is said and done, ‘3’s & 7’s’ comprises a decent introduction to an album bearing peculiarly schizophrenic overtones. We’re still unsure where our exact feelings on its parent LP lie, but you can bet your bottom dollar that Era Vulgaris will be widely regarded as one of the year’s finest rock records come December. It, like this single, does rock, after all.

When it’s not cackling at the merciless obliteration of livestock, anyway.