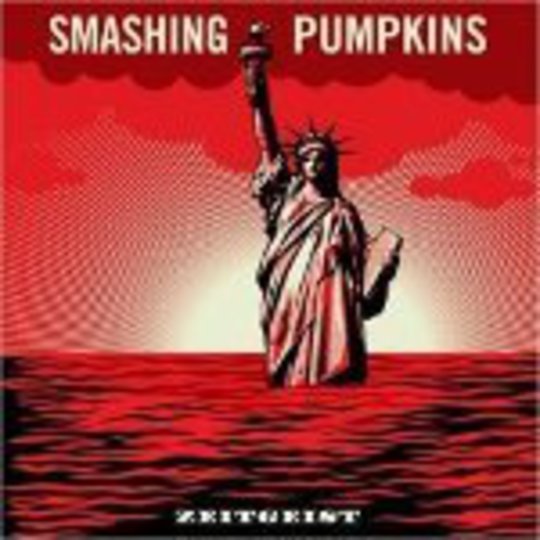 Transcript: In a darkened room furnished by a simple table and pair of wrought iron chairs and lit only by a pair of novelty Bauhaus lamps, Billy Corgan approaches a DiS scribe to converse about his new record, _Zeitgeist. Corgan is bright and breezy, conversational and fairly charming. Things have started well…_

Ah, Mr Corgan. Welcome back. Not brought your friends? No need... no need… just bring those metal riffs of pop destruction. Jimmy, you say? Excellent… can you settle him down, please? He’s getting a little agitated…

Now, Mr Corgan, I expect you’re pleased with your comeback.

“It’s not a comeback, I’ve just reclaimed my right to rock. I wanted my dreams back.”

Ah yes, you’re referring to that full-page advert you took out in the US papers last year. That was, umm, a little portentous, wasn’t it?

“Well, this is the _Smashing Pumpkins.” _

True Billy, true… but then again, we’re lacking, as I mentioned before, James and D’arcy…

“I AM THE SMASHING PUMPKINS. With Jimmy, of course...”

Ah yes, Jimmy, what does he bring to this record?

Yes, unfortunately I did. Almost ruined that album for me.

Quite liked that one actually, Bill… But to be honest, I’m pretty glad you’ve returned to the rock. Those first songs off Zeitgeist are pretty heavy…

Mmm, yes. But it’s a bit like repeating the trick from Mellon Collie…_ and Siamese Dream, isn’t it? ‘7 Shades of Black’ sounds like it came off the same production line as ‘Jelly Belly’ or ‘Zero_’...

_“But it holds up well in comparison?” _

_“Cos all you lazy fucking journalists are going to do is compare it to my breakthrough, era-defining psychedelic heavy rock records, aren’t you?” _

Well, in the immortal words of Sven Goran Eriksson: ‘First half good, second half, not so good’.

That’s not important right now. What is more pressing is how, after a good six-song rally in the first half, you let the whole album go to pot from there on in. I mean, why all the ballads, Billy? They really are the definition of meandering suckiness.

_“Which ones? They’re wonderful, metal-melancholic lullabies with slight gothic overtones!” _

All of them Bill. But in fairness, ‘Never Lost’ and ‘Pomp And Circumstance’ are the worst. I do, however, lay down the wreath of absurdity at the feet of ‘United States_’ – that’s ten minutes of unnecessary, grinding, slo-mo dirge, right there.

Mmm. It’s hardly ‘Porcelina of the Vast Oceans_’, is it? I guess, however, that you’re at least trying to match the pretentiousness of that title...

Sense of humour still intact, I see. In fact, you never really...

And of course you appeared…

That was one of my all-time favourite guest appearances on that show; that bit where Homer says: "Thanks to your gloomy, depressing music, my children no longer hope for the future I cannot afford to give them.”

Good times indeed. Anyway, let’s get back to the matter in hand.

Do you know what my problem with this record is?

“What, apart from the fact that you think the second half of the record is gash?”

Quite. Ploughing on though, I don’t understand why you need to write a bubblegum rehash of glories old. Zeitgeist sounds like a watered-down version of the best bits from Mellon Collie…, meaning it just ends up being too similar to Machina… for its own good. Fortunately, you’ve managed to remove those horrible metal-electronics that you were using too much around then.

Mmm. ‘Stand Inside Your Love’ was ace though. There’s no lightness of touch anymore, Billy, what happened to being graceful with your bludgeoning guitars? You used to to kiss us before you fucked us with the Fender Blender.

_“This is hardly a constructive conversation any more, is it?” _

Sorry, you’re right. It’s a decent album, okay? It’s just not heavy enough to impress me anymore, nor visionary enough to compete with the new breed, nor packed full enough with great pop tunes to make me enjoy it on a Sunday afternoon. Oh, and the cover looks like an outtake image from Planet Of The Apes, rendered in a hideous graphic novel styling. In fact, rather like this ill-conceived piece of writing: it’s just become a bore.