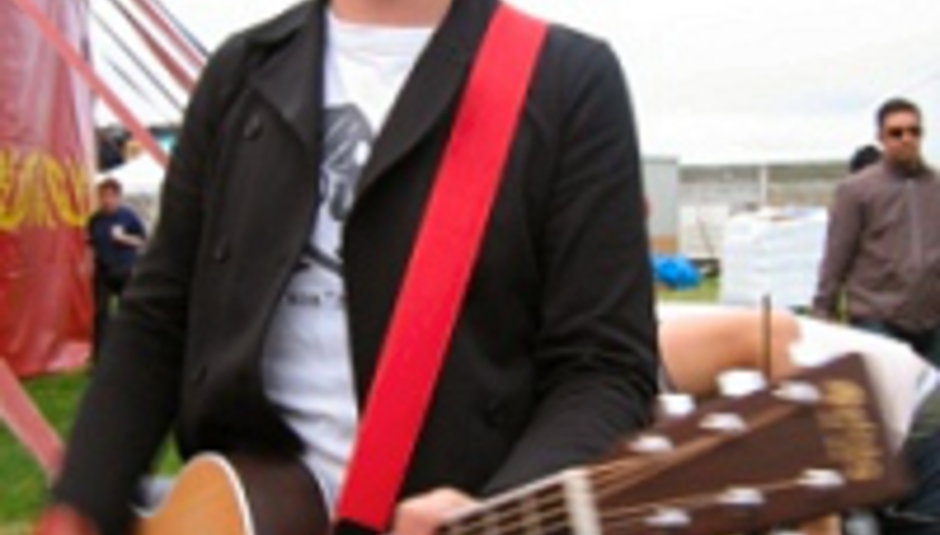 by Sean Adams July 13th, 2004
As the T hangovers subside, news filters in about Hope of the States playing a special acoustic show after security chucked them offstage...

It's nine o'clock and Hope of the States have just come off stage in the X Tent, having started their set fifteen minutes late but being forced to close it at the advertised time. After 'Goodhorsehymn', a man appeared on stage and had a word in the ear of front man, Sam Herhily, who then turned to the audience and announced, "they're pulling us, so this will be our last song." Raising his fingers in 'V's, he tells the crowd, "this isn't for you, this is for whoever's in charge." The disgruntled six piece finish their set with 'Enemies/Friends' to rapturous applause from the packed tent who had chosen to see Hope of the States over occupants of the other stages: the Pixies and N.E.R.D.

Clearly not content, Sam soon appeared outside, separated from around thirty adoring fans by a metal fence. "I'll go and get my guitar and finish the set out here," he tells them. Less than a minute passes before Herhily returns with an acoustic guitar, and band mate Michael Siddell in tow with his violin. The pair manage to play for a couple of minutes before security figure out what is happening and promptly attempt to stop Herhily and Siddell, who keep playing while walking away from baby-blue-clad security guards, further round the fence, with fans following eagerly on the other side. They finish their song and sign a few autographs before heading off, having made themselves the 'where were you?' highlight of the festival.

We're sure someone at Sony HQ will have something politely ranty to say about this later today.

DiScuss: Did you witness this? How was your weekend at T?